On Wednesday 26th January MAF’s Guinea-bound aircraft, N2114G, began a five-day journey from Uganda to Guinea. The aircraft has had a number of adjustments and is now ready for service. Pilot Roy Rissanen – who used to fly the same aircraft in Mongolia – accompanied by Guinea Programme Developer Emil Kundig, left Kajjansi and flew to Arua on the Ugandan border. 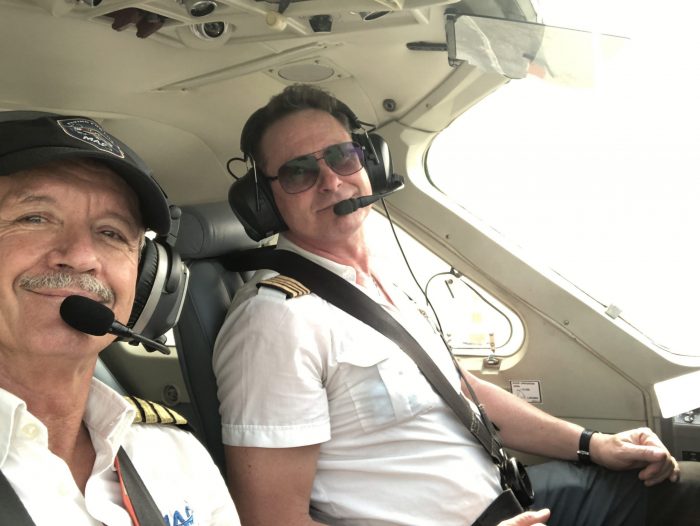 Roy has written a short diary each day, including his final thoughts (see Day 5) on the faithful aircraft itself which he has a special relationship with, having been there when it first rolled off the production line, welcomed it to Mongolia and ferried it to Holland when the Mongolia program closed.

Today Emil and I are planning to fly from Kajjansi to Arua (1.5hrs). The weather looks good. Plane is refuelled and loaded. It is quiet in Kajjansi, as it is a public holiday in Uganda today. We will refuel and overnight in Arua and need to do customs and immigration before departing. Praise the Lord we received negative COVID results this morning. So, we are clear to go! 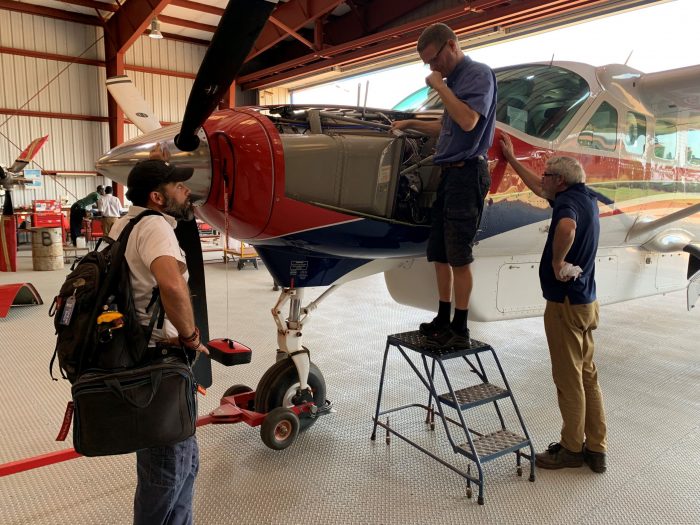 Emil [Kundig] and I overnighted in Arua, Uganda, [on Wednesday night] as planned. We got the refuelling, customs and immigration done smoothly and departed on the first flight. The first stop of the flight was at Bangui, Central Africa Republic. We got fuel quickly and managed to deal with formalities in good time. We also met with two Finns, who are working with UN flight ops there. One of them was an ex-MAF pilot.

Weather was good for the entire day, despite haze that caused some restricted visibility. We reached our next night stop [for Thursday night] Douala, Cameroon, ahead of time, thanks to strong tailwind. Formalities took more time than usual. We had been tested for COVID before departure. Here we took a test again. After three hours from landing, we checked into hotel. 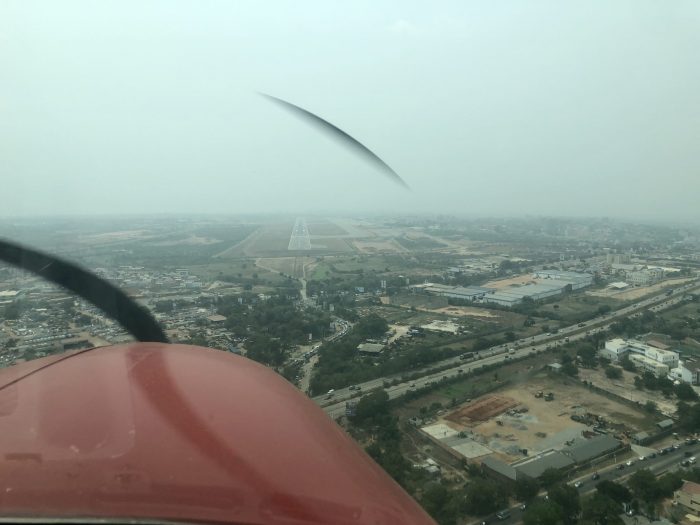 We started off from Douala today and flew to Accra for the next overnight. Weather was stable but hazy with reduced visibility all the way. This is typical for the dry season. Refuelling and formalities went smoothly, and we are having a good rest this afternoon while also planning for the next flying day.

The airplane has some minor discrepancies, which we need to take care of either on the way in Monrovia or when in Conakry. Nothing serious that would cause delays or keep us from flying. 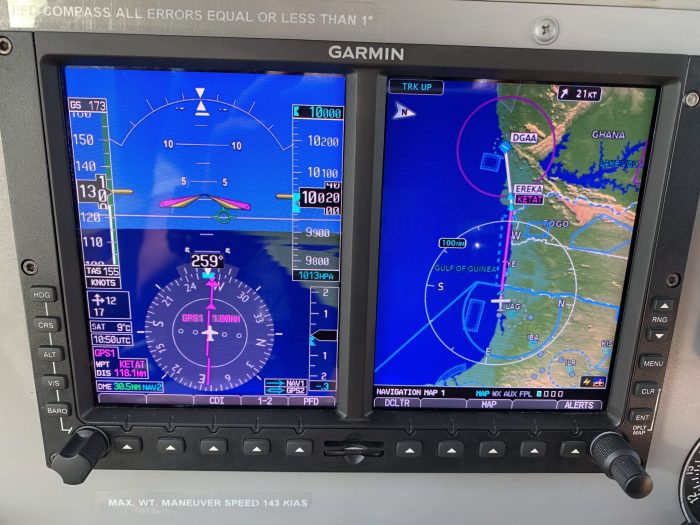 We flew from Accra to Monrovia today. Good weather, warm welcome from Liberians upon landing at Spriggs. MAF left a car at the airfield for us. Emil and I have unloaded goods for MAF and expats. We will refuel and file a flight plan. Then we will be heading to ELWA, to meet with other MAF expats and have a rest. 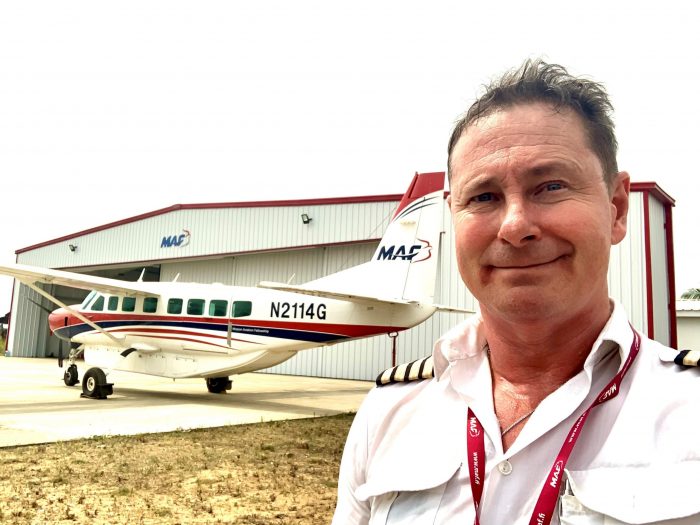 After flight from Accra, we stopped over for one night in Monrovia and met briefly with other MAF people. Some aircraft and ops items sent from MAF Uganda to MAF Liberia were unloaded. We put more fuel and loaded Emil’s aircraft mechanic toolbox in the plane. I managed to pick my personal belongings that I left in Monrovia last year, when planning to get back there to do more flying. Back then, my positive covid travel test result messed up the plan!

Before departing from Monrovia, we did a compressor rinse and washed the windscreen, which was dusty from flying for days through dry season haze with no rain. The flight from Monrovia to Conakry was a short one, less than two hours. On the way we flew through Sierra Leone, passing its capital city, Freetown, to our left.

On arrival to Conakry, weather was hazy as usual, but with better visibility than in most other places on the way. We were greeted with a warm welcome from the officials – and of course Margrit Kundig, who was happy to have Emil back and see the aircraft finally arrive. Margrit had been working very hard to get the permits and our airport badges. It took her an entire week to get the flight permit for us to enter Guinea! Thanks for all the encouragement and prayers to make this happen.

The aircraft that we now have in Guinea is of special importance to me. I saw it for the first time in Wichita, Kansas, when it was new and had just rolled out from the Cessna production line. I was in Mongolia to receive it when it was delivered to MAF to Ulaanbaatar in Summer 2000. With many prayers, help of God, efforts and teamwork we managed to build a flying programme that lasted twenty years, of which I had a privilege to be part of for eight years. I lived in Mongolia with my family for three years, when we were starting the programme. Then later on, I worked and lived there for another five years, flying and managing the programme – with assistance from my wife Sirpa – until the programme was shut down. We flew the aircraft with Sirpa from Ulaanbaatar to Holland two years ago. The ferry flight took five days over winter conditions in Siberia.

I feel privileged to be flying the same good old faithful aircraft again. It will continue to serve in God’s work in a new part of the world with a new engine, new paint, cold weather equipment removed, and a new tail number. Let us pray that the aircraft will continue to be a blessing to people living and serving in Guinea. We will use it to bring hope, help and healing in many ways; transporting passengers, supplies and medical patients needing urgent care – continuing to serve those who are in need in Guinea. 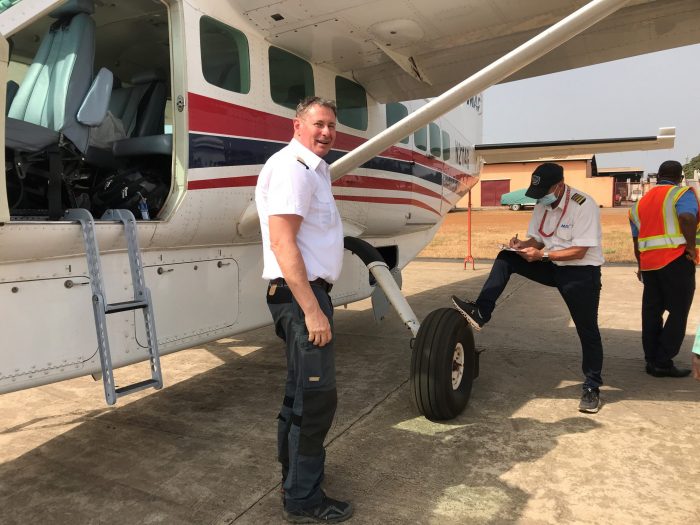