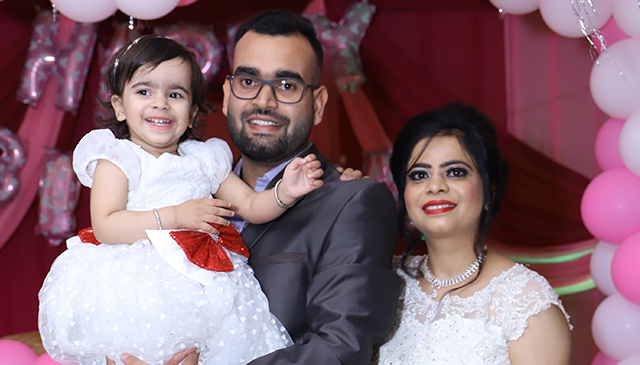 Having been brought up in a non-Christian household, Ravi was taught that Christians did a lot of bad things to Indian society and they should be hated. He did not know the truth about Jesus or the Christian faith till he was an adult. Pooja on the other hand, is from a first generation Christian family and was on fire for Christ. They met at a university-organised conference, and started talking. Ravi was confused about why Pooja and her family would choose to be Christians. Pooja challenged Ravi to read the Bible and find out for himself. Ravi started reading the Bible (to prove to Pooja how her beliefs were wrong and she and her family had made the wrong decision to convert to Christianity). Reading the bible changed Ravi’s life. He encountered Christ and was filled with a hunger to know about Him. In 2012, he made a commitment to follow Jesus, and serve him. A few years later, in 2015, he and Pooja were married.

Having completed an engineering qualification in Aircraft Maintenance in 2012, Ravi began speaking to his mentor, who helped him read the bible and learn about Jesus, about his desire to serve God. It was in 2013 that he heard of MAF and began the conversation about using his engineering skills to serve God.

Meanwhile in 2015, Ravi married Pooja, and in 2017, their daughter, Johanna was born. MAF was exploring options for Ravi to join the MAF team, and Ravi was willing to go anywhere to serve God. With the urgent need for a Stores Manager in Arnhem Land in 2018, he was asked if he was willing to take on the role. Ravi and Pooja agreed.

Because the role was a critical one, Ravi went on ahead, and Pooja and Johanna applied for visas to join him a few weeks later. Unfortunately, Pooja’s visa process became complicated, and they had to live separately for almost 2 years. In 2020, Pooja was finally granted a clearance to apply for a visa to Australia. They hope to continue to serve God through MAF, wherever He leads.

For Ravi, his time with MAF so far has been life-changing – “To be involved in sharing God’s love with others has been a great privilege which has transformed our lives.”

Ravi and Pooja Dwivedi are members of MAF India.

Jesus looking at them and said, “With man this is impossible, but with God all things are possible.”

Stay up to date on Ravi & Pooja Dwivedi