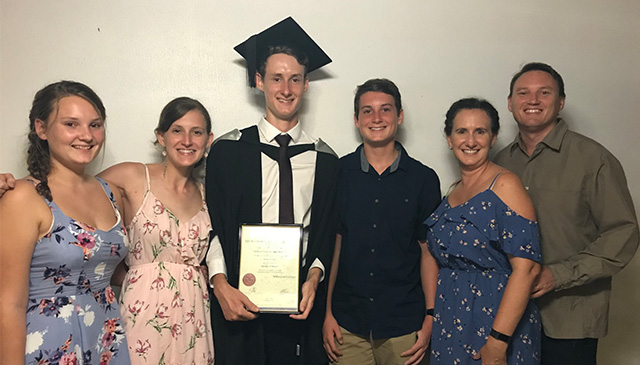 We both grew up in Christian homes and became believers at a young age and by our late teens we both had a sense of call to mission and outreach and so we went on Youth Dimension coffee shop outreaches together.

We married while we were still at uni, Donna was studying Early Childhood Education and Phil was studying Aerospace Engineering. We often wondered what God had planned for us. Towards the end of Phil’s final year of Engineering we received a call from a family friend who told us about an opportunity to serve with MAF and use the Aerospace Engineering skills for mission, we were amazed at such a unique opportunity. So we contacted MAF and sure enough such an opportunity was available, they were in need of someone who could design repairs and modifications for their fleet of mission aeroplanes. We met with MAF and continued to gather all the details about the mission and this role and we had a growing sense of God’s hand in it all. So we prayed that God would make his plan clear to us by opening and closing doors. He did just that and by the end of the year, it was obvious that he wanted us to serve with MAF. So we officially joined MAF in December 1997 and starting working with the team at the then head office in Box Hill in Melbourne.

It has been a great joy and privilege to help MAF keep its aircraft in the air and see them be used to bring Gods transforming word to the lives of those in extremely remote parts of the world.

In 2003 MAF moved its head office from Box Hill to Cairns in Far North Queensland and its aircraft maintenance facility from Ballarat to Mareeba, just inland from Cairns. MAF asked us if we would like to be part of this new adventure and admittedly it was a very difficult decision for us to leave home and family. But again God clearly showed us he wanted us to make the move and gave us the strength and peace to do it.   The new location improved our effectiveness in keeping the aircraft operating in all the remote locations they are based.

We served with the team at Mareeba for 12 years.   In 2015 MAF allowed us to relocate to the Sunshine Coast just north of Brisbane and allowed Phil to set up a home office and work from home designing the repairs and modifications for all the aircraft around the world.

The move to the Brisbane area has been of great benefit for our children to study.   Caitlyn is now a childcare worker and married to Cynan.  Josh is now a Mechatronic Engineer and engaged to be married to Holly.  Jasmine is now in Wedding and Event Assistant Management and engaged to be married to Jayden.  And Sam is studying Business Management part time and working almost full time as a Shift Manager at Dominos Pizza.

Since moving Donna has been teaching grade 5 at Glasshouse Christian College and has found great blessing in being able to teach in a Christian environment and share God’s love with the children.

We are overwhelmed by those of you who pray for us and we trust you too know the joy of being part of God’s team. Thank you, God bless you greatly.

'The Lord your God is with you, the Mighty Warrior who saves. He will take great delight in you; in his love he will no longer rebuke you, but will rejoice over you with singing.'

Stay up to date on Philip & Donna Andrews