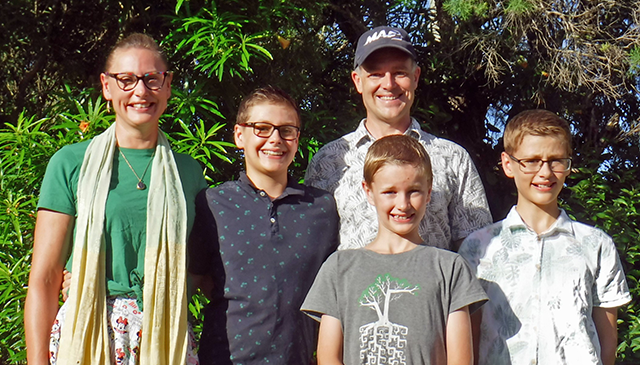 Dreams do come true—just never in the way we could ever have imagined! Nick’s initial dream of spending his life flying began as a teenager, but of necessity was put on hold for almost 30 years until just recently when he completed a year of pilot re-training with MAF in Mareeba.  After a career spanning Business Admin, Operations Mgmt, Film & Television Production and more recently as the CEO of an IT company, Nick’s career has taken him around the world and back again including stints in Canada, Japan, UK & Australia. It has been an unfolding miracle: watching God bring together our family’s passion for flying, MAF’s vision of “flying for life” and our love of Jesus’ words, “I have come that you may have life, and have it to the fullest abundance” (John 10:10b).

Ruth’s prior training as a Speech & Language Pathologist and Music Teacher are an expression of her love of communication and particularly helping people to find their true voice. She hopes to find a new expression of this work and is excited about what this might look like in their new community.

Growing up in New Zealand, Nick & Ruth first met when they were 12, and re-connected in London where they were married in 2004. They returned to NZ in late 2005 and have most recently lived in Christchurch raising their family of three boys. Now, along with Benji (15), Samuel (13), and Eddie (11), they’re really excited to be following the Lord’s leading into the family life of a line-pilot serving with MAF.

I have come that you may have life, and have it to the fullest abundance.

Stay up to date on Nick & Ruth Hitchins