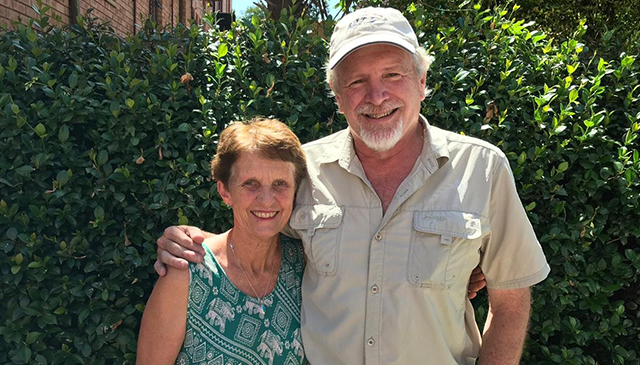 * This donation is not tax deductible

Through a series of God interventions, Mark was able to do his PPL in 1996, his commercial license in 2000, and with his wife Lorraine joined MAF in 2001. Mark has worked as an MAF pilot and instructor, and he has flown in several MAF bases around the world in Africa. From 2015 onwards, he also flew as a member of the MAF International Disaster Response (DR) Team. He served with the DR team in Nepal when the earthquake devastated parts of the country. During the political turmoil in South Sudan in 2016, he responded by evacuating people, supporting MAF’s partners and transporting aid into isolated regions.

Then in 2021, Mark joined the international team as a training base instructor and line pilot at Kajjansi in Uganda. For the first time Lorraine was able to join Mark on the field. After 14 years of flying on seven different programs and in 15 different African countries, for Mark it’s still about the impact MAF can have as it serves those who are in remote locations, and who would not otherwise be easily reached for the Lord.

Mark and Lorraine are currently serving in Arusha, Tanzania, after moving there from the Uganda program in August 2022, for Mark to take on the role of Chief Pilot and Operations Director with the MAF Tanzania program.

But as for me and my household, we will serve the LORD

Stay up to date on Mark & Lorraine Liprini