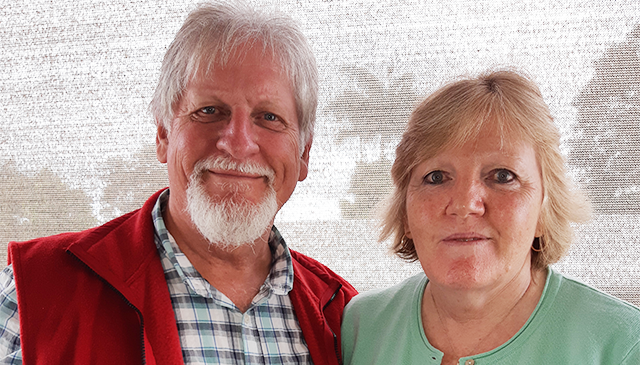 Marcus was raised in a Christian home and was aware of God’s calling on his life to be a ‘pilot for Jesus” at a very young age. Julie became a Christian at the age of about 11 and together they grew up in Youth Group, taking on various roles in their Church.

Marcus and Julie began working towards joining MAF and in 1984 began serving with MAF in Arnhem Land. Between 1986 and 1996 they served in Papua New Guinea before returning to Ballarat where Marcus trained to be an Instructor. They were part of the Flight Training Centre at MAF AIR in Ballarat until its closure.

In 2003 they moved to Coldstream where Marcus became the Chief Flying Instructor of the MAF Flight Training Centre, now a part of MAF International, with Julie as his Administrative Assistant.

The MAF Flight Training Centre was moved from Coldstream in Victoria to Mareeba in Far North Queensland at the end of 2014.

Marcus and Julie helped to set up the new MAF Training Centre at the Mareeba Airport and have felt very privileged to be part of the professional MAF Mareeba team, who train and equip young men and women seeking to serve and honour God, using aircraft, throughout the world.

As the Chief Flying Instructor as well as the Chief Pilot of Mareeba and Timor Leste, Marcus has brought a wealth of experience to the training, development and mentoring of the student and MAF programme pilots and Julie was the FTC Administrator, (until Oct 2019) and encouraged the wives in their preparation for the Mission field.

A special verse is Jeremiah 29:11
“For I know the plans I have for you” declares the Lord, “ plans to prosper you and not to harm you, plans to give you hope and a future”. (NIV)

Currently, Marcus is a roving, training and mentoring pilot and Julie supports him from home.

They have 4 married children: Kelli, Lori, Erin and Travis and 14 grandchildren (as at March 2021).

In their spare time, they enjoy spending time with the family and grandchildren, which involves travelling. They dabble in renovating the house, love having visitors and have begun researching their family history.

Marcus and Julie acknowledge and thank a great many people who have partnered with them over the years.

“We are so grateful for your prayers and sponsorship of the work of MAF…thank you!”

Trust in the Lord with all your heart and lean not on your own understanding; in all your ways acknowledge Him and He will make your paths straight.

Stay up to date on Marcus & Julie Grey