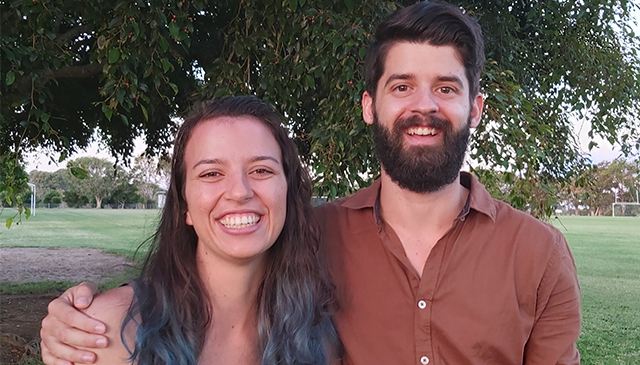 Jacob and Eliza have always had a heart for mission. Jacob would look up at the sky as a young boy, dreaming about flying with the birds. This led to Jacob pushing trolleys and saving every penny for flying school, which resulted in him attaining a Commercial Pilot License at the age of 21. He was kept from flying at the time and then faced a health challenge to overcome. With a love and passion for flying to glorify God, Jacob first applied with MAF in 2018. He prayed that God would give him someone to do mission work with.

Eliza was inspired by missions as she watched many missionaries present at her church growing up, where at 14 years old she found herself frustrated and in tears, as she was unable to immediately join missions. At 20 years old Eliza, a newly registered nurse in paediatrics, felt a deeper passion for vulnerable people groups which led her to spend a year serving in southern Africa.

Jacob and Eliza met at a church plant in 2018 and spent three years in a Bible study before they began dating and nine months later, they married. Soon after, they contacted MAF about the possibility of joining and serving in missions.

They are now on a journey of preparation for placement in Arnhem Land, excited to see what God has in store for their future.

'And God is able to make all grace abound to you, so that having all sufficiency in all things at all times, you may abound in every good work. As it is written, He has distributed freely, He has given to the poor; His righteousness endures forever.'

Stay up to date on Jacob & Eliza Jasch