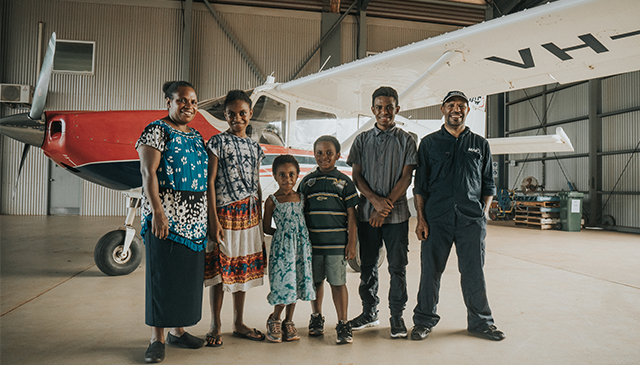 The Wayambo family are from Papua New Guinea (PNG) and joined MAF International in October 2017 where Francis works as an aircraft avionics maintenance engineer with MAF in Arnhem Land, in the Northern Territory of Australia.

Francis grew up at SIL – PNG’s mission centre in Ukarumpa, where his father worked as a carpenter. Living amongst missionaries from all over the world, had a lasting impact on him as he accepted the Lord Jesus Christ as his saviour at the age of 9 and visualised becoming an overseas missionary one day.

Also, being from PNG, where many remote parts of the country are accessible by aeroplanes only, he grew up seeing mission aeroplanes flying missionaries and doing humanitarian work. Thus, his dream job was working on aircrafts.

By God’s grace, his dream job of being an aircraft maintenance engineer and his vision of becoming a missionary overseas have come to fruition. He is combining his passion for mission and aviation with MAF in Arnhem Land.

Francis married Hellen, whose father worked with New Tribes Missionaries in Goroka, PNG.  Hence, she had similar experience with missionaries as he had. Francis and Hellen are blessed with four (4) children, namely; Jonathan, Nori, Josiah and Ruth.

The Wayambos are part of MAF Papua New Guinea

Jesus came and said to them, “All power has been given to Me in heaven and on earth. Go and make followers of all the nations. Baptise them in the name of the Father and of the Son and of the Holy Spirit. Teach them to do all the things I have told you. And I am with you always, even to the end of the world.”

Stay up to date on Francis & Hellen Wayambo