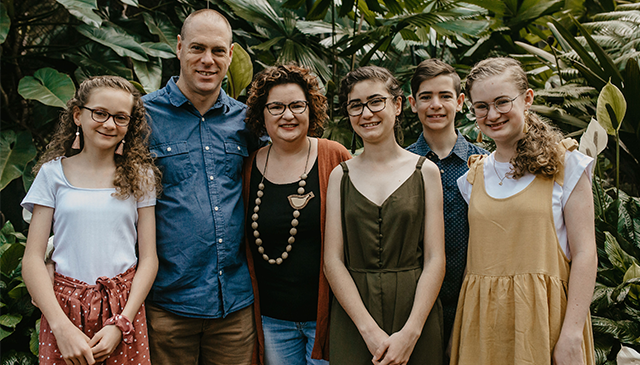 Before Dean and Christie met, God placed a call on them to serve Him through mission work. Christie grew up on the mission field in Indonesia and felt strongly called to some form of mission service, while Dean felt called to use his chosen occupation as a pilot, to serve the Lord.

Dean and Christie commenced their journey with MAF in Arnhem Land in 1999 as a young couple. During their time in Arnhem Land, their family grew with the arrival of their 4 children – Emily, Bianca, Nick and Kira.

Whilst with MAF, Dean has been a Pilot, Operations Manager and Assistant General Manager. Christie has also had many different roles involving tutoring, hospitality and working as a Teacher’s Aide.

At the end of 2015, the Giles family relocated from Arnhem Land to Cairns where MAF has a regional support office. Dean now works in the area of Operations Support for many MAF programmes around the world and Christie is working at a Christian School in Cairns.

Be strong and immovable. Always work enthusiastically for the Lord, for you know that nothing you do for the Lord is ever useless.

Stay up to date on Dean & Christie Giles