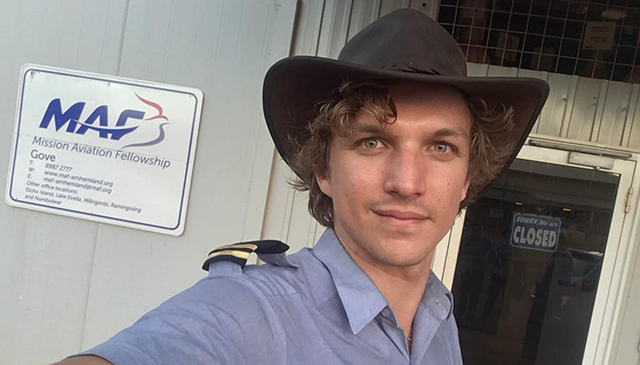 David was born in the town of Ipswich in Queensland Australia, as one of 5 children. David’s upbringing was full of adventure and excitement. David’s parents were devoted Christians and raised him to be a young man that loves God and desires to help others. At age 13 David was baptised and committed himself to serving the Lord, however it wasn’t until he was 17 that he began wholeheartedly seeking the kingdom of God in his own life and for his future.

The desire to live a purposeful life led David to try his hand at a lot of different professions both during and after graduating high school. Eventually settling on first aid, David began pursuing a career in nursing and was accepted into university. Unbeknownst to David he would never embark on this path. Late 2014 to early 2015, 17-year-old David went on a short-term mission trip with Teen Missions International Australia to Cambodia for 6 weeks. A trip that would inevitably lead him to working full-time with MAF. On this trip, the Lord stirred in David a deep desire to reach out to the isolated, to let them know they are deeply loved through both word and deed.

After returning from Cambodia, David deferred University indefinitely to attend the Teen Missions Australia Bible College for two years. As his time began coming to a close at college, he began looking at skills and trades that he could learn to take to the mission field. Eventually settling on going back to nursing, he had done 3 years of volunteer work with St John Ambulance and was quite comfortable and confident with achieving this goal. However, during the final months at Bible college his peers challenged him on seeking to do Gods will, not what he finds comfortable or easy. Being convicted by this challenge David began looking at other skills and eventually settled on mission aviation after hearing a MAF testimony at church. Feeling ill-equipped in just about every way David put his faith and future in the Lord’s hands and began pursuing this new goal of becoming a missionary pilot.

After a year of preparation and work, David had the opportunity to train at the MAF training centre in Mareeba, studying and training for his commercial pilot’s licence. Since David started training in late 2017, he has completed his licence, been on mission trips to Nepal, Cambodia and Vietnam, worked as staff at Teen Missions International Australia and more recently he did some missions flying in Papua New Guinea with the Strictland Bosavi Foundation. He is now serving with MAF Arnhem Land as a missionary pilot and amazed at the journey God is taking him on.

“But this I call to mind, and therefore I have hope: The steadfast love of the Lord never ceases; His mercies never come to an end; they are new every morning; great is your faithfulness. "The Lord is my portion," says my soul, "therefore I will hope in Him."

Stay up to date on David Chandler