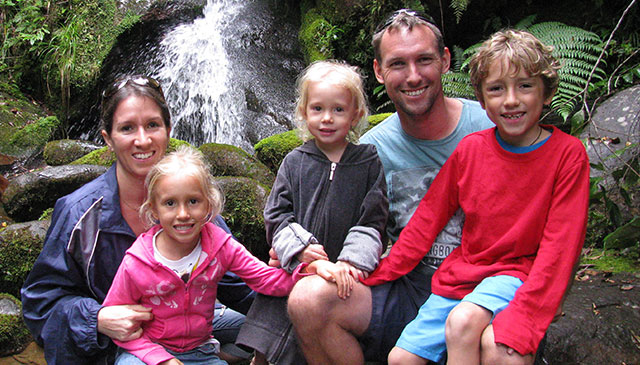 Brad and Michelle Venter have been married for 10 years and have three children, Nathan, Hailey and Megan. They are from South Africa but are currently serving in Papua New Guinea with MAF.

Brad is qualified as a pilot and also as an aeronautical engineer. He has always wanted to fly as a missionary pilot and is excited about flying for MAF as he is pursuing his passion for flying and is able to use his skills and gifts to serve the Lord. Michelle is a qualified teacher and remedial teacher, but is currently a stay-at-home mummy with a full-time job of looking after the family.

The Venters were accepted into MAF in January 2010 after starting the application process in July 2009. They left South Africa in mid January 2011 and are now based in Papua New Guinea.

They spent about 2 months in Mt Hagen where Brad did a ground school on the Twin Otter, they did language training and Brad also did other training to learn how MAF operates in PNG. They also spent a week in the bush to consolidate their language training and to experience first hand the PNG culture and learn from the people themselves. Following all of this, they moved to Goroka in the Eastern Highlands where they are based at the moment. They will be there for the next while as Brad  flies the Twin Otter and the C206.

Trust in the Lord with all your heart and lean not on your own understanding. In all your ways acknowledge Him and He will make your paths straight.

Stay up to date on Brad & Michelle Venter