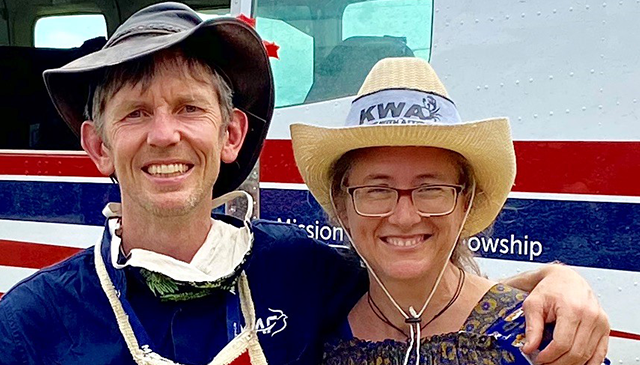 Born in Gisborne, Andy became interested in aviation at the age of four. Upon leaving home he joined the RNZAF as an avionics technician. Around 2000, he read personal accounts of Papua New Guinean Highlanders and their experiences and response to the Gospel—it left an impression on him. He recalls wondering if he might end up in PNG some day!

In 2015, he obtained a job with Pacific Helicopters, a commercial company based in Goroka (PNG Highlands). This has been ideal preparation for his role as a Maintenance Controller with MAF.

Sharon, originally from Whanganui, has been working with Pioneers in PNG as a rural doctor since 2008 in the context of widespread fear of spirits and poor access to healthcare. Andy and Sharon Brandon were married in March 2021 and are now working together with Mission Aviation Fellowship.

PNG is a country with huge challenges, has had a particularly rapid transition from the “stone age” to the “smartphone age”, and is culturally very complex. It is also a land of opportunity, may God make it a “light to the nations”!

Andy & Sharon appreciate being involved in the ongoing legacy of what God is doing in PNG—including MAF’s significant involvement since 1950. MAF as an organisation is seeking to be holistic in its approach, professional in its operations and accountable to its supporters. Your support and prayers for them are appreciated!

Andy Campbell is a member of MAF NZ.

For you were bought at a price; therefore glorify God in your body and in your spirit, which are God’s.

Stay up to date on Andy & Sharon Campbell