When God wants to save a life – Medevac in Kenya

On Friday May 29, 2020, MAF pilot Daniel Loewen-Rudgers flew a medevac flight for two babies with heart conditions. The flight enabled the babies to reach hospital in time but it was the actions of many Christians working together that allowed God’s purposes to prevail. 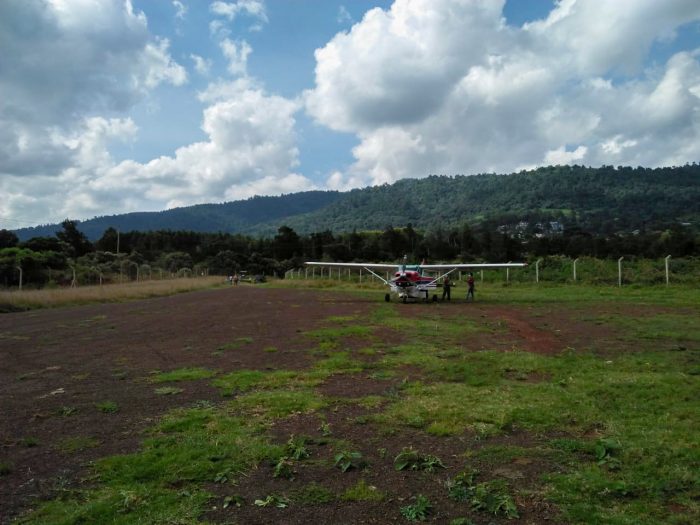 ‘It is one of those flights you go to bed knowing that you actually touched a life!’ explains Operations Manager Caleb from his desk in the MAF office in Nairobi. Hundreds of miles to the north in Dukana, Missionary Eddie Andersen agrees. ‘It was so beautiful! Just seeing all these Christians working together – treating these precious families as their very own family. I felt everyone involved has given every love and help to these beautiful babies and their families!

‘Thank you so much for helping us get some emergency cases medevaced out of Dukana!’ Eddie continues warmly. ‘It was so awesome to have the two missions working together seamlessly as we dealt with patients on the ground. They flew directly to Kijabe Hospital and the mission doctors met them on the airstrip and took them directly into care!’

Urgent flight
‘Both children were in critical condition. Without a flight to a major hospital with a heart unit they would certainly have died within a couple of days,’ he says, filling the background to the two tiny patients, who live with their families in Dukana, a community in Kenya’s arid north. ‘One was of the baby son of one of our Church members and the other patient a baby of a destitute woman from Dukana,’ Eddie explains. 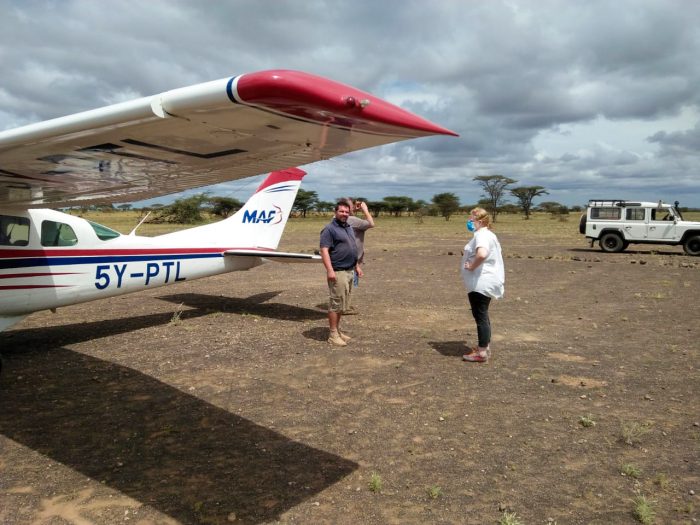 He and Rachel have been working in Dukana with the Africa Inland Church (AIC) for the past 11 years ministering to first generation Christians from the Gabbra people group. They run a radio station, Automotive Workshop and church and have made their home in a community that’s as far from advanced hospital care as you can get. By road it is a two or three day drive to reach Nairobi – a journey involving a lot of trouble, expense and time they can ill afford.

‘My wife Rachel is a midwife and has been ministering in the clinic to share Christ with women who have never heard of Jesus. It has been making a great impact,’ Eddie shares, adding ‘but nothing speaks more than helping in time of desperation!’

Acting in faith
‘Rachel had felt in her heart that she should go visit a family in town who she had delivered a healthy baby a day before. So she dropped everything she was doing and went over to see the family carrying her small medical bag just in case – as she often does,’ Eddies explains.

‘When she arrived at the hut, she noticed the baby was not as colourful as it should be. No one else seemed to have noticed yet as they were celebrating the new life in the traditional way.

‘Well, as good practice, she took the baby’s vitals and checked the oxygen levels and noticed they were dropping quickly! She ran home, grabbed the car, and took the mother and baby to the local clinic where she put the child on oxygen.’

God had already gone before them to save the life. ‘We praised God because the machine (oxygen concentrator) had just been donated a few days before! Thanks to this vital equipment, the baby’s blood oxygen levels began to improve. ‘The oxygen numbers started rising by 10% (up from 50%, normal is 90% and above.) Yet it was very apparent the child needed a big hospital – and fast!’ Eddie says.

God’s plan
They knew that God wanted them to act. ‘Rachel called me, and we both felt God wanted us to try to save the life. So I called in a medevac not knowing how to pay for it, but knowing if we did not act the baby would die,’ he says.

God quickly revealed more of his purposes as another baby arrived needed help. ‘As soon as I ordered the plane, a 10 month old baby arrived at the clinic almost comatose and listless – with a panicking mom. The clinic staff didn’t know what to do. They could see an infection in his foot, but his whole body was shutting down and they couldn’t figure out why.

‘My wife and I quickly included them in the medevac log as government clearance needed to be gained. By the grace of God, both babies were approved for travel and MAF came directly with AIM AIR providing a Missionary ER Nurse with oxygen and expertise.’

The link in between
‘Rachel had identified the heart defects and found doctors to help – but we needed the link between,’ Eddie explains. That link was pilot MAF Daniel Loewen-Rudgers, who flew three hours in the Cessna 206 to pick up the tiny patients and their families. He left early in the morning to fly the route which takes you up right up the centre of Kenya, ‘past the Aberdares, Maralal, over some highland Maasai Country in the middle of Kenya – to Dukana on the Ethiopia boarder,’ Daniel explains. 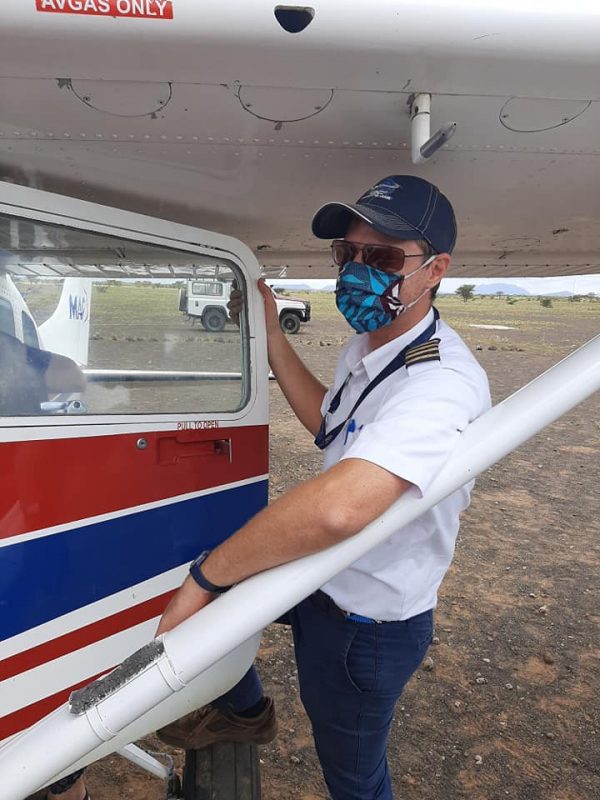 ‘We’ve actually got stuck in Dukana twice this year because of the soft runway,’ he explains, picking up the story. ‘This time it was dry enough so that there was no issue. We landed and Eddie was there with his wife. We had to wait a little while for the families to come.

‘The youngest baby that was just a few days old,’ Daniel remembers, talking through the seating arrangements. ‘The father sat in the front with me. In the middle row we had the mother with the two day old baby and the nurse. And in the back we had a translator, a young lady, and the mother with the ten month old baby.

‘I’ve never had that many people in a 206 before!’ Daniel smiles. ‘I had eight people coming out of Dukana, so we had a full load! But I was still well under max weight just because everyone was so light!

Daniel took off from Dukana for Kijabe, the mission hospital on the Rift Valley, a bumpy 2 hour 40 minute flight away. 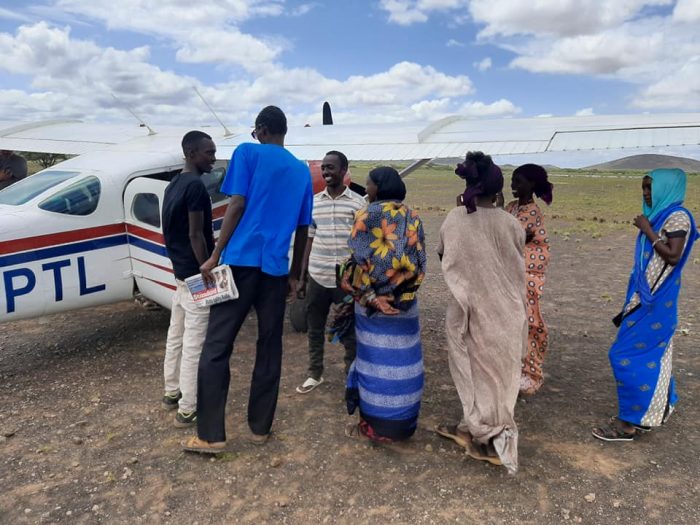 Safe landing
Thirty miles out of Nairobi,’ Kijabe, has its own little airstrip,’ the experienced pilot explains. ‘It’s about 700 meters and high at 7,000ft with an upslope and a nice dogleg to the left at the top. It’s an interesting runway because as it slopes down into the end of the runway where the terrain just drops away, almost like a cliff. ‘Because it’s right on the edge of the Rift Valley, we get strange winds.’

Daniel overflew the strip three times to check it was safe to land. ‘I flew past bottom end of the runway to see how bumpy it was and if there were any downdrafts. Then I went back around, did a right hand turn and came back hugging the terrain and did a medium pass at 200 feet to see if there was anything on the runway. Finally, I did a left turn and came back around and set myself up for a landing.’

‘On most landings when we come straight on to the final approach but on this one you come at a 45- degree angle so that if things aren’t looking good you add full power left turn and climb out. But the approach was fine so we were able to land safely without any issues.

‘I taxied up to the airstrip and there were two missionary families there with some cars to pick up everyone. And they drove them off to the hospital!’ Daniel says, rounding off his part in the story with his passengers safely delivered.

‘We’re bringing them to a very good hospital!’ he reassures. ‘They can’t get that kind of care anywhere else, except maybe a private hospital in Nairobi, which they can’t afford. That we could fly them straight to Kijabe during this Covid time, was definitely a miracle for the two ladies. That was really good!

Successful surgery
A few weeks later, Eddie is delighted to have good news to share. ‘Little Barako, the newborn, had a successful surgery Kenyatta National hospital,’ he updates. ‘This was a miracle in its self as little baby Barako had a heart condition that only one or two doctors in the country know how to fix.

By some miracle Kijabe Hospital was able to get him in where usually there is no opening! Barako is still in Kenyatta Neonatal unit recovering from surgery. He is the youngest baby to every successfully have the particular heart surgery in Kenya!’

‘The other baby Isako, sadly died, Eddie sadly reports. The doctors discovered that the source of all his problems including his leg infection was actually in his heart.

Because his heart was infected with Tuberculosis, it was sending infected blood throughout the body shutting everything down. The sack around the heart was filling up with infected fluid and causing the infected heart to struggle even more. Poor thing!’

‘Once the problem was diagnosed, the doctors were able to go in and set a drain on the heart to get the infected fluid out – and get proper medication in to the source of the problem. Despite this, a day or two before he was due to undergo open heart surgery, he sadly passed away.

‘Speaking with the doctors at Kijabe, they tell us that if these babies had not been medevaced as quickly as they were, they both would have certainly died. Isako with a day or two and Barako within a week.’ Instead, the flight and excellent care they received gave both babies a fighting chance.

‘Isako family has felt Christian love in this tragedy,’ Eddie reassures. Christian Care The AIC family in Nairobi extended love and care to the families at a heartbreaking time. ‘I called ahead to our AIC Church Head office to see if someone could assist care for them and immediately they gave me a name and number of a care giver who is providing housing and food for them at the hospital. The person they gave me was so happy to serve and receive them even though they were from a faraway area. They were ready to just wrap their arms around that family!

‘Praise be to God that he touched our hearts to send them to hospital and praise be to God that MAF responded immediately to my request! Also, praise God for hundreds of other answers to prayer in the Hospital at Kijabe and Kenyatta. Without all these things working together this life could not have been saved! Please continue to pray for the families of both babies. ’