MAF’s shuttle flights are like flying busses that go from airstrip to airstrip to bring people and cargo to different locations. It requires a versatile aircraft and some planning. Sometimes rows of seats are removed or stacked on top of the cargo and reinstalled to make it all fit into the aircraft. 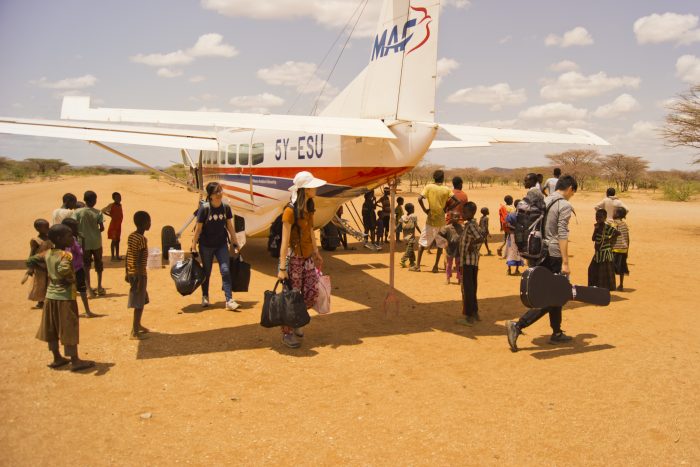 When Hassan Zakayo was discharged from a hospital in Nairobi the doctors had decided that there wasn’t much more they could do for him. He was therefore taken to Wilson Airport in an ambulance to be flown home to Loglogo on MAF Kenya’s Marsabit shuttle. Hassan had been in hospital for almost two months. And this was not the first time. The elderly man was receiving dialysis in Marsabit, not far from home, but had been going on MAF flights to Nairobi because of other complications. 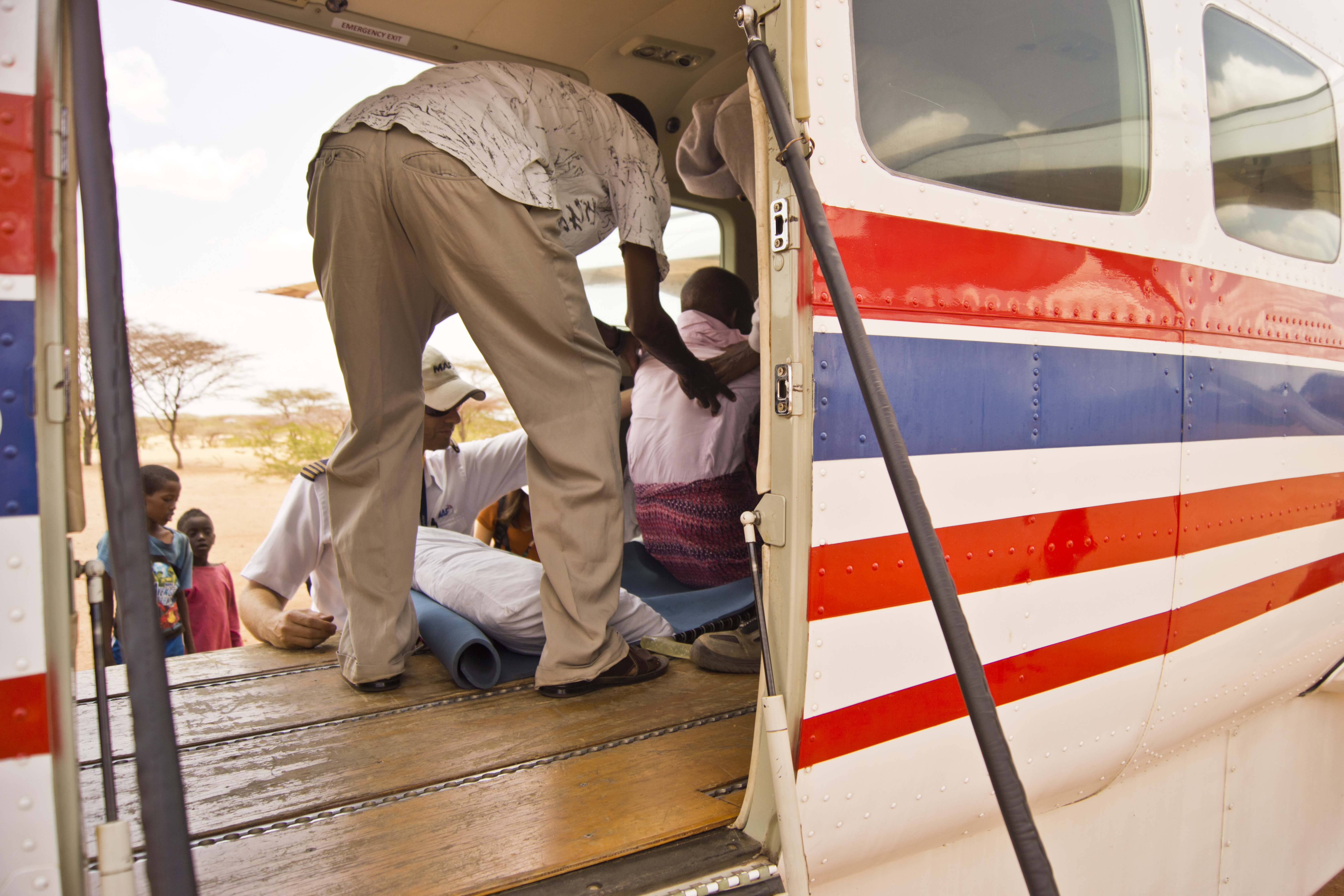 When the ambulance arrived at the airport, no one had been notified that Hassan was expected to be fastened to a stretcher, but seats had already been removed to make room for cargo later on, so a stretcher could quickly be installed on the floor of the Caravan aircraft. The paramedics lifted Hassan on a blanket directly from the ambulance on to the aircraft where he was strapped to the stretcher.

Becoming aware that three of the passengers on this flight were medical students from Hong Kong the paramedics gave them instructions on what to do if the patient needed attention during the flight. The first leg of the flight was going to take roughly 1 hour 40 minutes. Shortly after take-off, while the aeroplane was still climbing, Hassan started complaining about having back problems and that the strap across his chest was too tight. He wanted to sit up. No one could leave their seats before the aircraft had reached its cruising level of 12,000 feet and even then, Hassan could not be moved during the first leg. In the meantime, one of the med students gave him a couple of painkillers hoping that they would relieve his pain. 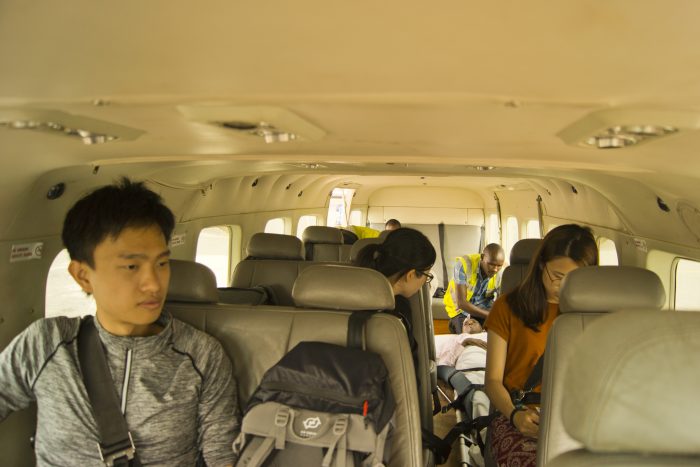 The three med students got off at the desolate airstrip in Korr where they were going to volunteer at a school for a week. They had just spent three weeks as volunteers at Kapsowar Mission Hospital in Eldoret under Africa Inland Mission (AIM). 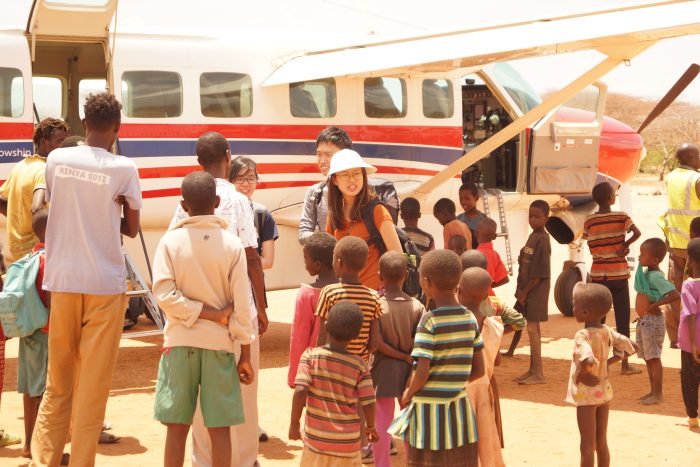 Hassan was relieved from the stretcher and was seated on the bench at the very back of the aircraft together with his son. The next leg to Loglogo was only a little more than 15 minutes. Hassan Zakayo was known by many people in Loglogo and many had come to meet him at the airfield. Several hands lifted him out of the aeroplane and into a vehicle. He was taken home to be with his family. Two days later, he died. 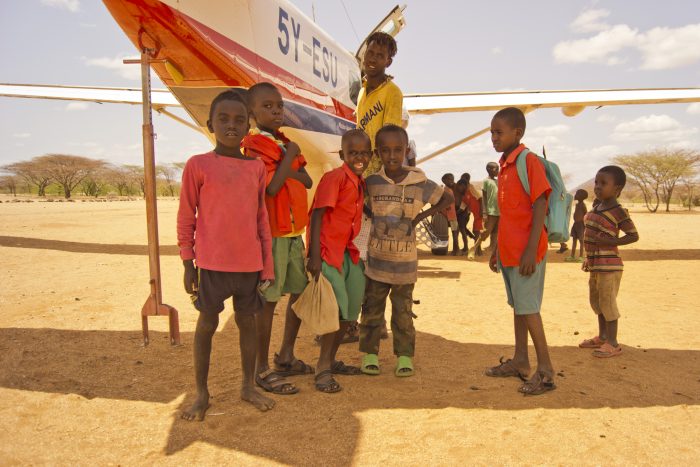 Among the people who helped Hassan out of the aeroplane was MAF-pilot Melvin Peters. After many years of service with MAF, lately four years as base manager in Loglogo, he and his wife were getting ready to return to Canada. All their stuff had been sold to various other missionaries and some of it was sitting on the back of his pickup ready to be loaded into the Caravan to find their new owners. Furniture and boxes were edged in like a big 3D jigsaw puzzle leaving just enough seats and a very narrow aisle for four more passengers to board the aircraft in Marsabit.

Two of the new passengers in Marsabit were Lyn Bishop and Tim Wright. They had come with MAF to Marsabit the week before to assess the progression of a peace project that they started seven years ago called Sauti Moja (Kiswahili for ‘A Voice’). The work is done among vulnerable women, especially widows, of the Rendille and Borana tribes who have lost children, husbands and livestock to a never-ending conflict caused by disagreements on pastures and cattle raiding. Sauti Moja has provided livestock loans and educational support for girls who have been chased away from home. 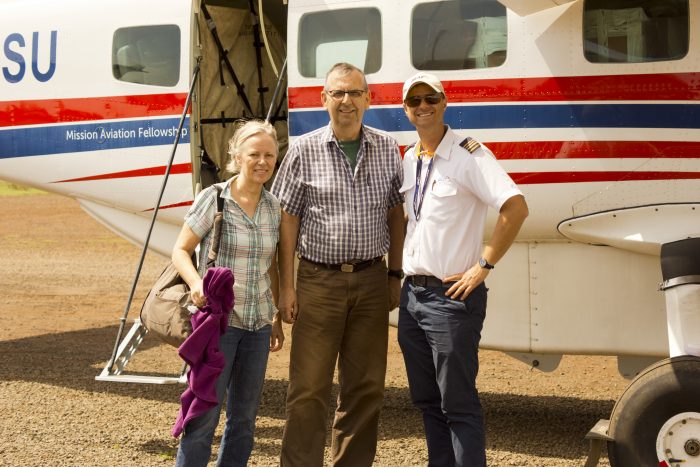 During their visit Lyn and Tim were delighted to see that the women had achieved a sustained peace within the tribes, they were enjoying freedom of movement within the land, and their children were able to attend school. However, they also learned that there was an erupting conflict between the Morana and the Gabra tribes. Their hope is that the widows who have been practicing peace for seven years can be used as catalysts for a peace process among the tribes who are now in conflict. Also, per request from the widows, Sauti Moja have started Peace Clubs in primary schools to teach the children at a young age to live in peace with one another.

Tim and Lyn have been active in the Marsabit area since 1998 and has used MAF from the very beginning. Back then they used MAF to bring supplies to Marsabit, and now they find it even more valuable to be able to fly when they come on short mission trips instead of spending precious time on the road. “It’s a very safe way to travel,” Lyn says. “Even though the roads are now paved, safety is always an issue, and with MAF’s outstanding safety records we feel very secure and it enables us to do our work.”