Translators Unite for the Indigenous Bible

It is 2019 and there is still a long way to go to complete translating the whole Bible to Yolngu-Matha, the heart language of the Yolngu people. The encouraging news is that there are both indigenous and non-indigenous translators in North East Arnhem Land who have invested years in building relationships and learning language to effectively translate the Bible. 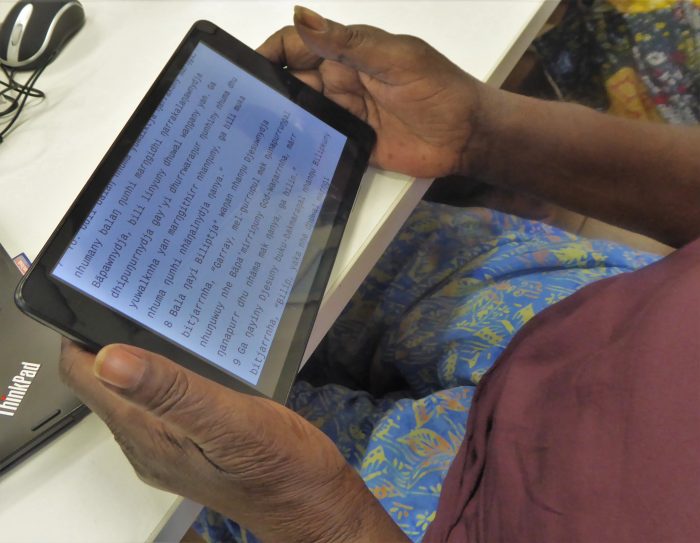 Yolngu-Matha was originally an aural language. Though the Yolngu excelled in bark paintings, traditional dances and other forms of art, their only method of passing down knowledge and preserving language was through speech. Sadly, without a written form and other influencing factors going against the language, it is reported that a few Yolngu languages might have been lost forever.
With the incoming influence of the west, the language soon borrowed letters from the Latin script (same as English) to transpose from spoken to written language. Yolngu-Matha consists of 12 different dialects each with its own name, spoken across roughly 25 clans. While there is much difference between dialects it is still common for Yolngu to understand and converse in more than one dialect. Most often, these dialects become a second, third or fourth language for them. This in turn pushes English, a language the Bible is readily available in to be the sixth, seventh or even eighth language for some. 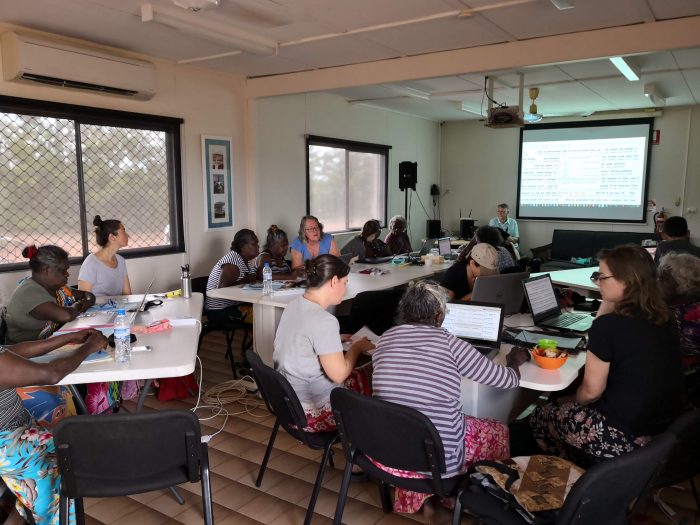 To paint a picture of how ‘fresh’ this language is for translators, the first online Yolngu-Matha dictionary was released only in 2015 by Charles Darwin University.

Bible translators at the MAF Hangar

Bible translators gathered at the MAF base for two weeks to learn a new translation software called ‘Adapt It’. Adapt It is a free tool for quickly translating between related languages. This is a software that runs on all major platforms facilitating translation and collaboration between other translation tools such as UBS Paratext and Bibledit. 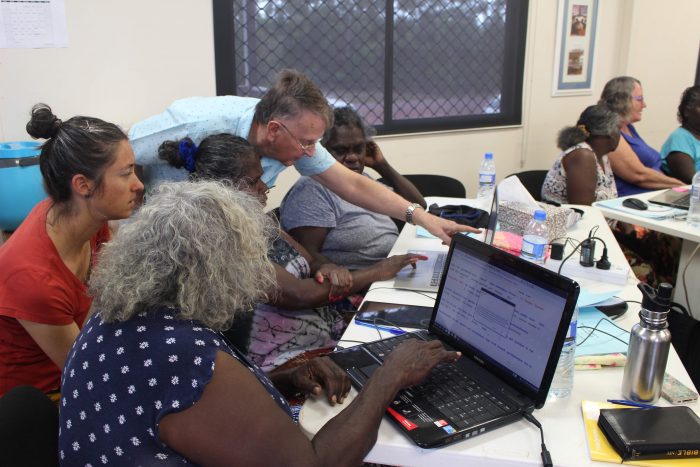 Matjarra Garrawurra is one of the indigenous translators who attended the workshop. She said, “English is not our first language. We have a lot of people who don’t know how to read the Bible or don’t understand it in an English context. As I grew up I saw this need and so I wanted to become a translator.” Matjarra is from the homeland of Ramingining and is currently translating into Liyagawumirr. Another Yolngu translator, Nancy Ngalmadjimadj who is translating into Maung said, “We are doing this so that our people can read about and understand God in our language.” 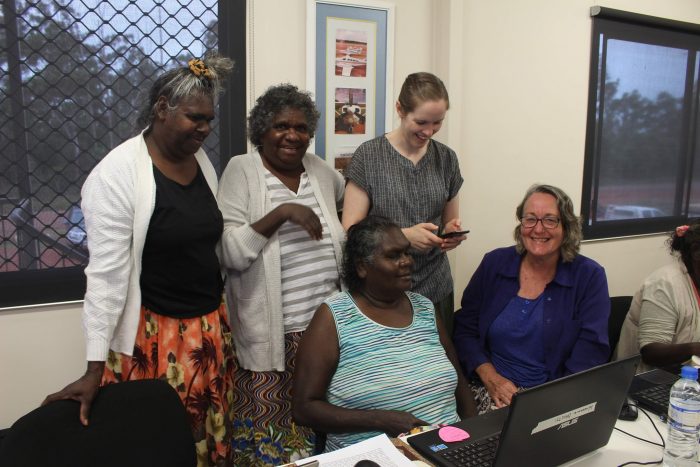 The Adapt It workshop was initiated by Translators Louise Macdonald and Margaret Miller from Co-ordinate-Supporting Indigenous Scriptures (CSIS). They expressed their gratitude for the support received from MAF in flying participants and facilitators, hosting the workshop at the MAF hangar and for providing accommodation, billeting and camping gear. MAF also provided continuous technical assistance during the workshop. Anton Zhang, MAF Arnhem Land’s new Technology Services Coordinator helped set-up computers and fixed problems that arose. Catharine Carpenter and Corrina Loenen, wives of two MAF pilots also helped with the functions of Adapt It. Louise and Margaret mentioned that the workshop couldn’t have happened without MAF’s extensive support. 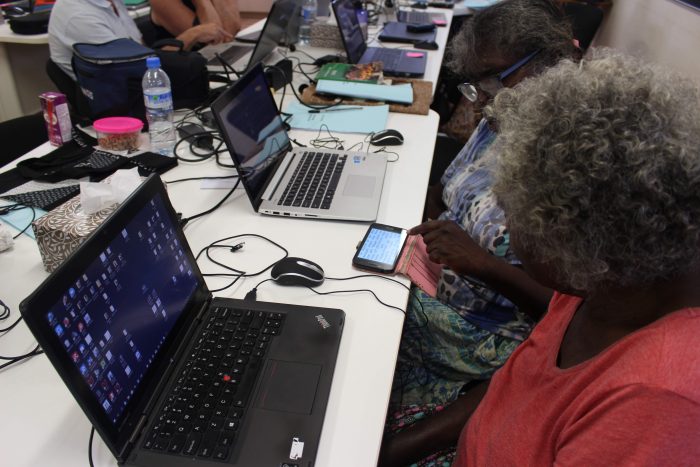 It is encouraging to know that the New Testament was fully translated into Djambarrpuyngu in 2008. Margaret Miller who was part of the Djambarrpuyngu translation team explained how the Yolngu she worked with in translating the New Testament had the vision for their fellow Yolngu. “They saw their families from other clans who didn’t have any scriptures in their language and so a movement started.”

The Gospel of Mark in Dhuwaya 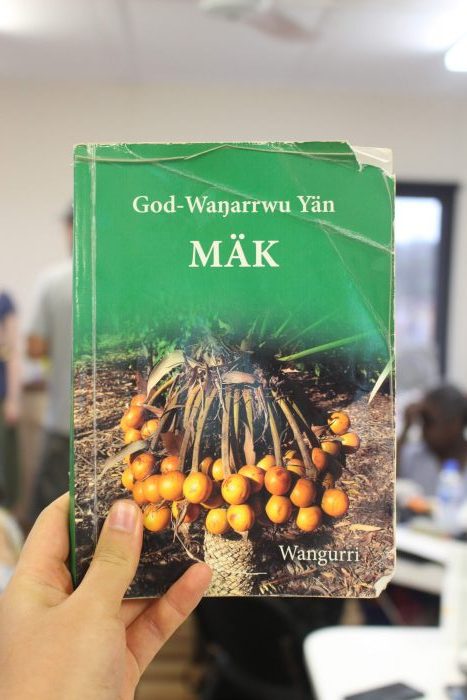 That Sunday was a historical day for the indigenous Bible in Australia. There was major celebration at the Yirrkala church as the book of Mark in the Dhuwaya language was dedicated for God’s glory. It is currently the only book from the Bible that exists in Dhuwaya. The old lady who worked on the translation passed away shortly after she finished. She was not able to witness the dedication; she has paved a path for her people to know more about Jesus in their own language. Anton said, “Bible translation is a long process and it can take years for a single book of the Bible to be completed. But praise God for translators who commit themselves to this arduous but eternal work.”