My name is Yingiya Guyula and I’m a senior leader and elder from the Liya-dhalinymirr Djambarrpuyŋu clan. This is my journey with MAF in Arnhem Land.

I was born and raised in the bush near Buckingham bay and the Arafura swamp in Arnhem Land. We walked from country to country when I was young. There were no roads and not many airstrips then. We were known as the nomads who worked from season by season, going to the next waterhole; always on the move to the next place where food was available.

The only option of transport we had in the bush was the aeroplane. The landing strips were built by a pioneering missionary who used to fly around Arnhem Land. His name was Harold Shepardson, we called him ‘Bapa Sheppy’ which literally translates to ‘Father Sheppy’ in English. He used to fly into the bush and collect crocodile skins from our people and trade them with the outside world on our behalf. When this stopped in 1968, our people went on to do logging and timber and Sheppy continued to support us.

Sheppy flew in rations and also gave us a ride when we needed to go somewhere. I knew of aeroplanes as a little boy, but I never knew of cars, bicycles or anything else on the ground.

By the time I went to school, we had tractors in the homelands. I remember Balanda mechanics working on these tractors everytime they broke down. I liked the idea of working on motors and engines and it soon became my ambition.

In 1973, I came to Dhupama college in Gove after boarding school. My desire to work on cars kept me in college. When I went back home to Galiwin’ku, I told my father that I wanted to become a car mechanic and he took me to the only workshop on the island with hopes of finding me job. To my disappointment, we were told that there were no jobs at the workshop but the mechanic introduced us to Sheppy.

“Why cars?” asked Sheppy. “What about working on aeroplanes?”

“No, no, no! That’s too much for me. Planes fly in the sky. What if something breaks if I made a mistake?” I reasoned.

A few days later, Sheppy came to meet me. “I’ve spoken to them; the MAF pilots and engineers. They’ve told me that they would love to train you. They would love to have a Yolngu working with them.”

Hearing this, I paced around uncontrollably in deep thought. I was just offered a job! I took my time, looked at Sheppy and said, “OK. I’ll give it a go.” 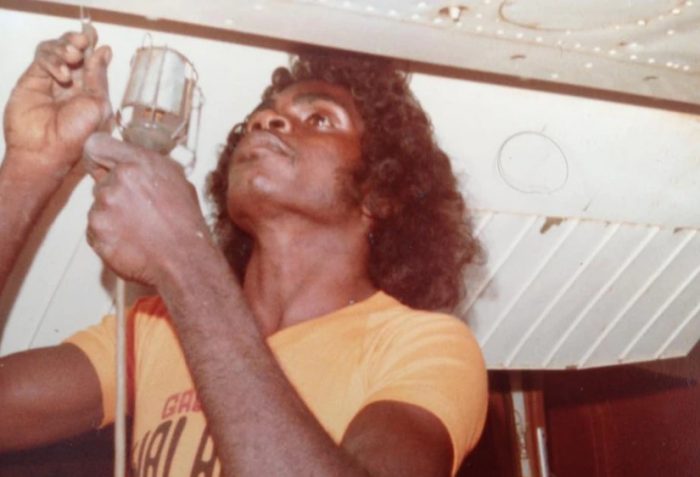 At the MAF hangar

Soon, I started working with MAF. I started with basic chores like making tea, sweeping the floor, keeping the hangar clean and washing aeroplanes. We always had 44-gallon fuel drums coming in and I had to roll, stack up and refill them. My eyes would always be on the engineers working on the planes.

A couple of months later, I was given a spanner. “This is a spanner, and this is a spark plug,” an engineer said. “You use this to take off the spark plug. You’ll have to clean it up; there’s usually muck in there.” Cleaning spark plugs was the first thing I did on aeroplanes. I then progressed to working on wheels and joints. I was always encouraged by the MAF staff; they would often tell me that I was doing a good job. Then came a time when I started working on propellers. I was excited that I had to use special tools like torque wrenches for the very first time! I always had a licenced engineer double checking and signing off my work.

We moved bases from Galiwin’ku to Gove due to difficulties that arose in shipping parts from the MAF Head Office in Ballarat, Victoria. The waiting times were expensive as MAF planes were often grounded while waiting for parts to arrive. So, it was decided to shift the workshop to Gove where logistics had better coverage. I came over to Gove and built the hangar with the other engineers. This went on from 1979 through to 1984 during when, I would also go out on supply drops to deliver flour, sugar, milk and other stuff for people who lived in country. Half the aircraft was open, and it sure was a scary feeling. I always thought these supply drops were a great missionary service by itself. 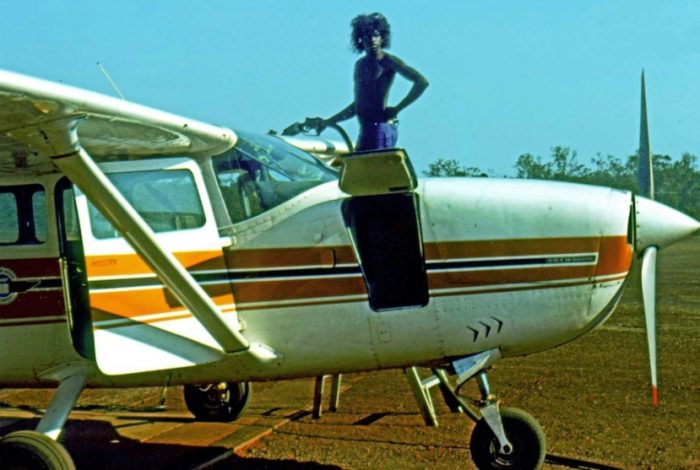 When all this was happening, Yolngu elders came around to tell me that they were very proud to see a Yolngu working on aeroplanes. “We’ve never seen a Yolngu work on aeroplanes,” they said. They then went to the General Manger of MAF and asked if MAF would teach me to fly.

When I heard this, I told them that it would never happen and that I was more than happy fixing aeroplanes, but I finally gave into the idea of flying.

Back in the day, we had a flying club in Gove and every now and then we would hire an aeroplane to practice flight. There were a few of us Yolngu who started training, but because of time, money and availability, it was just me. I carried on because I was working with MAF.

I went on to get my learner’s permit and radio communications license. I then started work on my restricted private pilot license. During the week, I serviced aeroplanes with MAF and on the weekends, I learnt to fly.

There was a time when I was asked to go to the MAF headquarters in Victoria to help dismantle a Cessna 207. It was a new feeling being in another place, but I was excited. At the shop, I undid the wings, elevators, ailerons; paint stripped the fuselage and removed the engine which I disassembled later at the engine shop. What fascinated me the most was experiencing the dark room where aircraft were checked for cracks.

In my downtime, I was given some lectures on flying and when the time came, I did a solo flight over Victoria. Everybody came out to the airport to see my landing; they were all Balanda. We didn’t celebrate with champagne, but with coffee and lots of hugs! I asked myself, “What are these people excited about? It was nothing!” But then again, it was my first solo in the sky.

I also did my solo cross-country flight in Victoria, from Ballarat to Mount Gambier to Horsham then Back to Ballarat. I was nervous about the ‘four-seasons-a-day’ Melbourne weather. 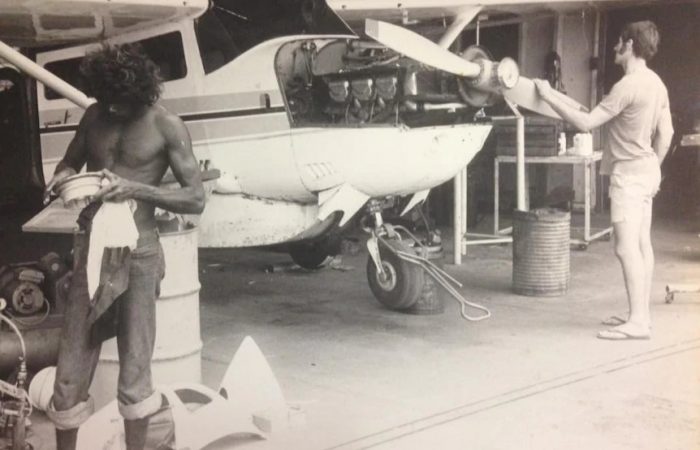 In the recent years, many airlines and charities have entered Arnhem Land, but MAF was here from the start – right after Sheppy. Sheppy was a one-man airline who flew around North-East Arnhem Land and MAF took over his work in this wild frontier with even more planes. MAF was the only one here, living and working in our homelands and amongst our people.

Working with MAF was the first job I ever had. Whenever I look back, I always say, “I could have been something else; I could have done something else,” but then I look at Mission Aviation Fellowship and realise that it’s a family I have grown up into. Rob Hadfield has been a big support to me and of course, all the pilots and engineers that I worked with during my time. I look at MAF as my tribe, my family. 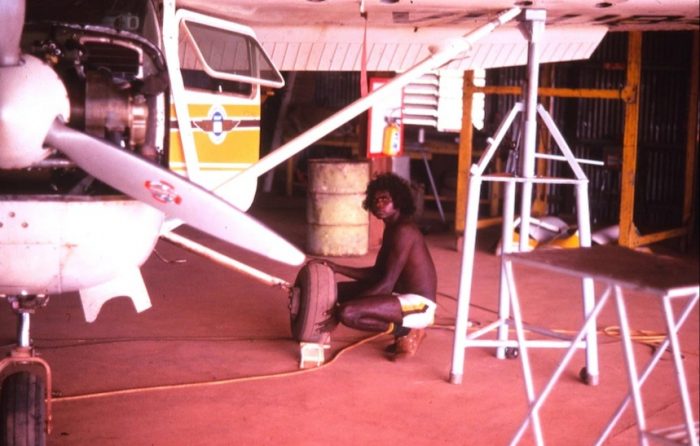 Yingiya’s dream for his people

I would like to start up a flying school for the Yolngu. I’m am currently looking for people who would support my dream. There are young indigenous people out there who have the knowledge; and I think we should use this time to train them to become the finest pilots and engineers.

There is a great opportunity for us, Yolngu to run an airline across the Top End that will serve the people in the homeland communities and I am prepared to stand up as a role model and show the youth what’s possible.