I sat on my couch and retired for the day, when I heard a familiar ‘ding!’ I reached into my pocket and my phone lit up to notify me of a text from Roland. It read, “James has confirmed for Garrthalala tomorrow. He has asked to be picked up from Yirrkala. A relative of his and a child will also be on the flight.” My excitement shot up in mere seconds. Tomorrow was my first flight for 2019! In less than 12 hours, I would be on a MAF plane, flying out to a homeland for church!

James Marawili is a phenomenal man whose actions translate from the heart he has for his people. He is Yolngu and hails from the beautiful homeland of Baniyala which is a 45-minute flight from Gove. I had a quick but good chat with him when I first came to Arnhem Land in 2016 for a look-see. He was working with MAF then, I have been around him for a while now to know that he loves Jesus and wants to share Christ’s love to his people. He was heading out to the remote homeland of Garrthalala with MAF to do outreach. 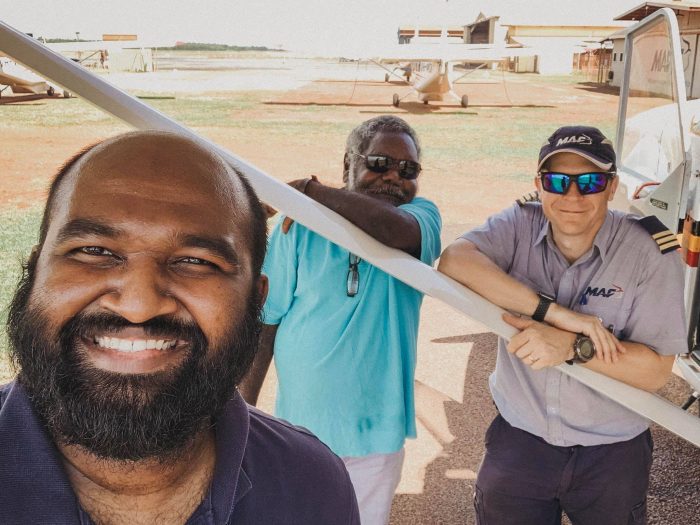 Still fuelled by the excitement from the night before, I was ready to head out to Yirrkala half an hour early. I grabbed the keys to the MAF mini-bus from the counter, said goodbye to the family and I was on my way to pick up James. The drive to the community of Yirrkala is about 20 minutes from the mining town of Nhulunbuy, where I live. James had seen me from a distance and was heading out when I pulled over by his house. James opened the door with a smile on his face. “Nhämirri nhe?” (How are you?), he asked. “Manymak wäwa!” (Good, brother!), I replied. “Go this way, we have to pick up my auntie and her child. They are coming with us,” he said. His auntie was at her porch when we reached. James jumped out from the mini-bus and walked over to her fence to talk to her. He was back a few seconds later saying, “Let’s go. She’s not coming.”

As confusing as it can be to understand how plans change in the last minute, this is the Yolngu way of life!

Tim Vallance-Webb was our pilot. He was at the airport an hour before James and I arrived, completing paperwork and making preparations for the flight. We were weighed and allocated seats. As usual, the flight offered us spectacular views of Arnhem Land!

Tim is one of the most experienced pilots in the programme. He fondly spoke about Garrthalala and how it was easily one of his favourite homelands from when he first started flying in Arnhem Land. “There’s something really special here. I guess it’s the people,” he said.

We soon arrived to a hot, but welcoming airstrip with the endless bush to one side and the beautiful homeland of Garrthalala by the ocean to the other. As we unpacked, a man walked out to welcome us at the plane. His name was James as well. We followed him to a wooden shade-structure, on a small cliff that overlooked the beach.

An old man walked towards us from one of the nearby houses. It was Dungala Mununggurr, the Traditional Owner of Garrthalala. He was one among the 12 to sign the Yirrkala Bark Petitions in 1963 – the first traditional documents recognised by the Commonwealth Parliament. These petitions are the documentary recognition of the Indigenous people in Australian law. Along with Dungala came a few men, women and children.

Tim had brought along two MAF Resource Boxes for the people in the homeland. These were boxes of Bibles, gospel stories, Christian DVD’s and other forms of Christian media that are always on demand in the homelands. We were able to distribute a total of 20 items including two Bibles that day! Tim cooked the sausages that we had brought along. We gave thanks and ate together. We
had gathered in Garrthalala to talk about Christ, to learn more about Him and to strengthen each other. It took me back to Matthew 18:20, where Jesus said He was present in the gathering when people come together in His name. This was us celebrating communion! 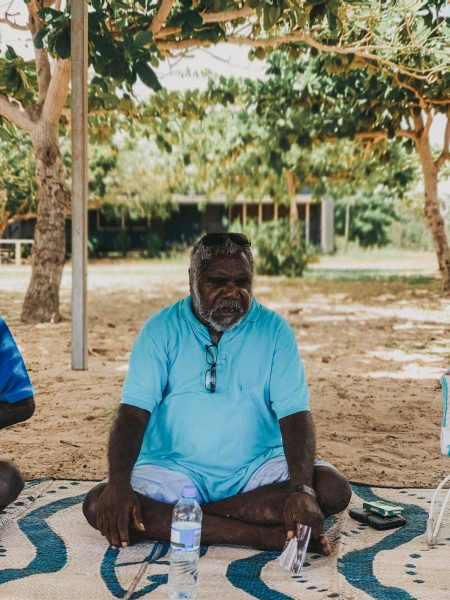 James invited Tim to share a message from the Bible. We sat in a circle as Tim read through Romans 1. We discussed the beauty of creation and how the beauty itself should in fact point us towards worshipping God. We spoke about how mankind has turned to worshipping the creation rather than the Creator Himself. Tim shared how mankind has moved towards worshipping deities and worldly things and gave examples of what the Balanda worship like money, cars etc. He spoke about God’s unconditional love and forgiveness available through Jesus Christ, and ended by saying, “When we look at creation, we should remember to worship the Creator and be thankful for Jesus who died for us.”

The people of Garrthalala were thankful for MAF and James Marawili for bringing God’s word, fellowship and encouragement to them. In Arnhem Land, we are to bring the hope of Jesus. We are flying for life.