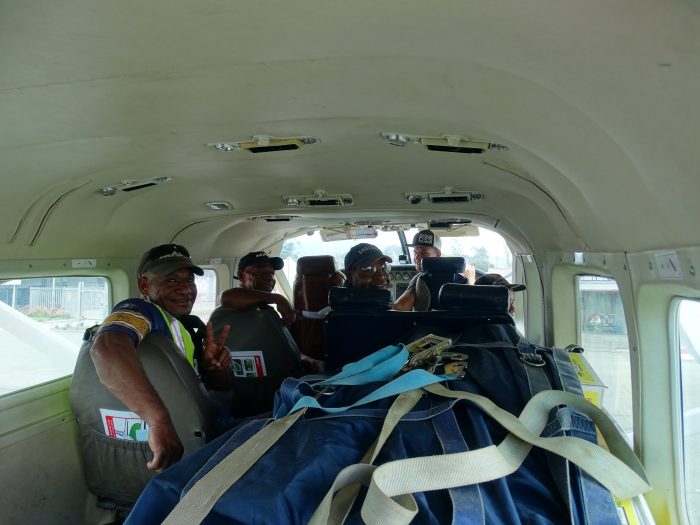 Late Friday morning on 30th September, the MAF ministry team set out for Yambaitok; our captain Mathias Glass flew us out bush to take part in a conference organised by the local church of Saluk. When MAF PNG’s Ministry Team leader Kambowa Kukyuwa invited others to join the outreach Kalex, Felix, Nevin and his adopted son Rocky and I joined the team. 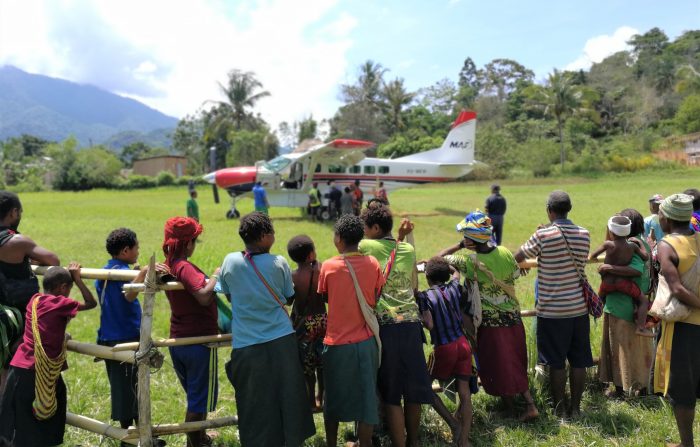 After landing in Yambaitok safely and seeing the plane leave we set out on a three-hour hike through the hot and humid jungle. We stopped a few times, resting and cooling off by the Yuat River.

Upon reaching Saluk we were welcomed with songs and tears of joy. This heart-warming welcome set the stage for what was to happen over the next few days. 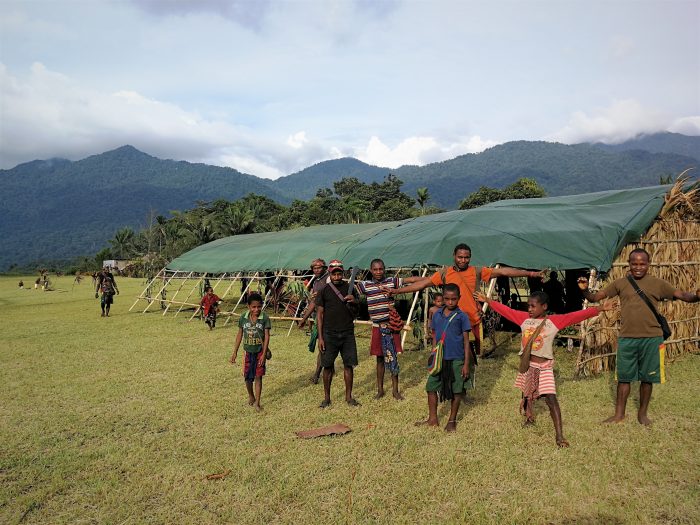 After arriving and unpacking we walked around the village to greet the people and get a feel of the place. Saluk is an isolated village where there is no mobile phone reception, no radio, no school, no electricity and no healthcare, nothing to make life easy. People live in houses made of plant materials such as bamboo mats for floors and walls, wood and leaves for roofs. Life out there is so different it’s hard to describe; all I can say is that you haven’t truly experienced PNG until you’ve stayed out in a village and seen the people, how they live and what they call home. Only then can you start to understand the culture.

The community had built a conference centre on the airstrip that they have been building for the last six years. They realise that MAF’s vision is to help them and so have decided to build an airstrip. They are hoping to open it next year.

We set up the ministry team equipment for that evening’s programme in a tent-like structure built out of bamboo and a tarp. While enjoying an early dinner the cool, late afternoon breeze felt nice in this hot climate. 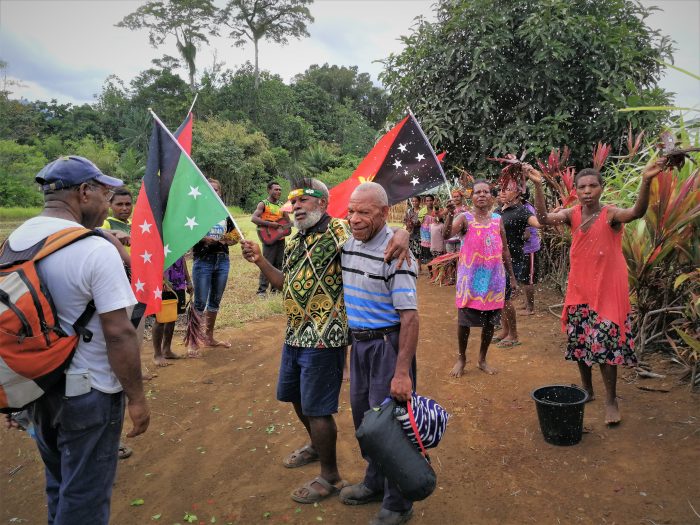 The evening came and Kambowa started by talking about MAF and followed by showing the Jesus movie. People gathered and the tent was quickly overflowing with people. The crowd watched and was amazed. Amongst them were people from neighbouring villages but also people from areas much further away. In the end, we prayed to finish the evening. That night was a late night as we packed up and had a cup of tea before sleeping on the bamboo mat floor.

The next day we woke to a beautiful morning. After breakfast and a bush shower, we returned to the meeting tent where the people were gathering again. After the local pastor finished the welcoming message and the worship songs, I preached.

The message was about the gospel and its significance in our lives. It continued to talk about our Christian walk equipped with the armour of God and the fruit we bear if remaining connected to Christ.

At lunch, we took a break until nightfall. In the hot afternoon, we spent time with the locals and went swimming in the river. After a rain shower, we returned to get ready for the evening. Again we were given food to regain strength. Food such as cucumbers, pineapples, water melons, peanuts, bananas, veggies were abundant. Our coming was truly appreciated. 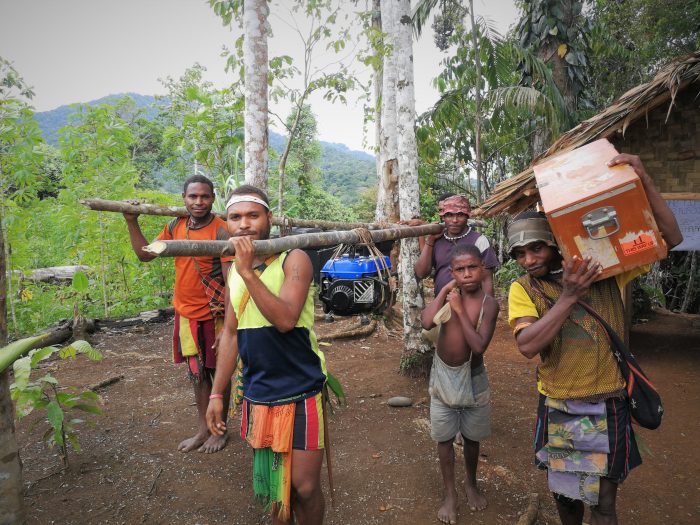 In the evening we continued the programme with an HIV/AIDS awareness talk that Kambowa gave and a subsequent HIV-related movie that was also well received by the community. Following that we showed the “End of the Spear” movie that depicts true forgiveness in the toughest life situation that some early missionaries faced in South America. As the night before, the tent was full and overflowing again. The programme came to a late end again and we headed to sleep.

On Sunday was the closing service for the whole conference. It had started earlier in the week and had gone on until then. We joined the service and Felix preached on the covenant promise that David made with Jonathan in the Old Testament writings.

This was used to illustrate how God’s promised covenant through Christ is for us as well. At the closing of the sermon many people were moved to make a change in their lives and as a sign went to kneel in the front of the church. It was encouraging to see so many people respond to what they had been a part of for the last few days and humbling to realise that God had used us to grow his kingdom amongst the people of Papua New Guinea.

Later that day we went on our way back to Yambaitok and arrived late afternoon. We set up the equipment once more and in the evening Kambowa proceeded to talk about MAF. After that we showed the Jesus movie in Engan, the local language there. The community gathered under large trees and watched the depiction of the story of Christ.   The next morning, we spent time waiting for our flight out. Hours passed and we quickly came to realise that this community has no way of communicating with the outside world. This makes it impossible to coordinate medical evacuations with MAF or to relay weather information or planning-related things . The people we conversed with regarding this made us realise a sense of helplessness. We encouraged them with ideas to help them sort things out.

Finally the plane was flying over our heads and proceeded to land – its first time in the bush of Papua New Guinea. After the pilots Jan Ivar and Mathias got out, the people greeted them and the new, shiny aircraft. P2-MEW is the latest plane to join the MAF fleet in PNG. Its mission is to be used to bring physical and spiritual transformation to PNG. This maiden flight was a great way to see it bring spiritual transformation.

Your prayers were part of life-changing moments in many lives. We want to thank God for the opportunity we have been given to go out on this outreach trip in the communities of Saluk and Yambaitok. We also want to honour him by saying that we were moved to do this for his glory alone. Thank you for your prayers, donations, skills and all that it took to make this trip happen. We have all been part of the spiritual transformation that is taking place in Saluk and Yambaitok.