Jasmine Puk is working as a Flight Programmer at MAF Customer and Operations Centre at Mt Hagen. On a day to day basis, she’s dealing with all types of booking requests both internally and externally, attending to customers queries, receiving medevac requests, and then helps to coordinate to evacuate patients. Recently, she had the opportunity to come along such a medevac flight. Below, Jasmine shares about the flight, the community, and the reason behind the medevac on a very personal level. 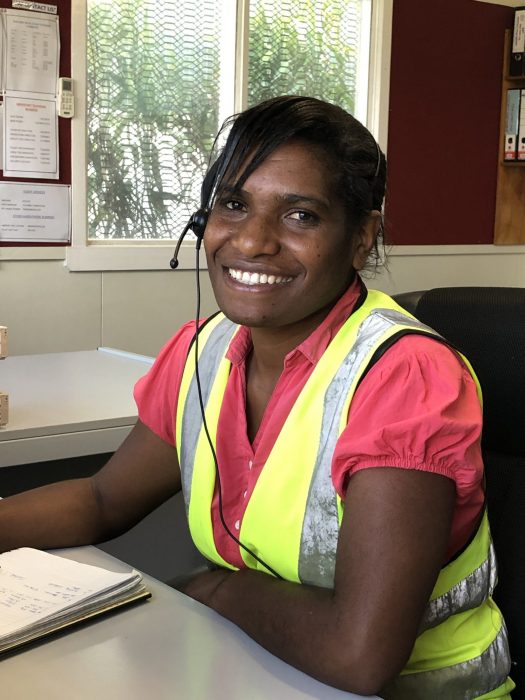 I used to coordinate medevac flights, but I had never flown on a medevac flight until April 30th at around 1:45 pm when I was asked to accompany the pilot to do a medevac. The patient was a young woman at Pyarulama. The village of Pyarulama is 48 nautical miles (nm) from Mt Hagen and 21 nm (approximately 10 min) east of Kompiam. The previous night, both of the woman’s arms had been chopped as a result of domestic violence. She was losing a lot of blood and became unconscious three times.

The medevac call came at around 11:27am and after several phone calls at the operations centre we decided to launch an aircraft. Looking at the available resources, we had an aircraft, but we didn’t have a pilot available to do the flight. We were looking at options and finally gave a call to Mathias Glass, MAF-PNG’s Safety Manager but also a pilot. He was preparing for safety meeting an hour from when we made the call.

Caller: “Mathias, we have a medevac patient at Pyarulama who needs to be airlifted to Kompiam for further medical assistance. Would you be able to do that flight?” Operations staff knew that he had an upcoming meeting but proceeded to ask him. MEDEVAC means a life or death situation and for MAF it takes a higher priority.

Mathias: “I have a meeting coming up, but it is okay; I can assign someone to conduct the meeting. Give me 20 minutes to collect my bag from home”.

Fast forward 20 minutes and the pilot was on site and the aircraft was all set with the help of the dedicated and hardworking MAF staff. We left Mt Hagen at around 1:45pm and flew for 30mins to Pyarulama. The weather was beautiful, and it was a smooth flight. As we were descending into the circuit, I could see people running in from all directions towards the airstrip at the sound of the aircraft. The view itself was heart-warming as I observed people running to see the plane.

Pyarulama is a remote community in Enga Province. It is surrounded by stiff, rugged terrain with mountains and fast flowing rivers. The people’s only means of transportation is by air.

As expected, upon arrival, the edges of the parking bay were filled with the smiling faces of beautiful people. 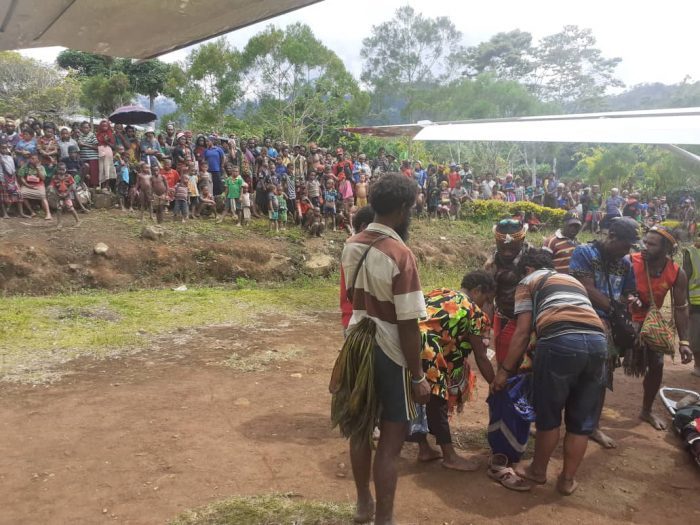 The woman was very weak, so they had to carry her to the airstrip. Mathias worked on his paperwork while the locals placed the patient on the stretcher. As I was standing there, one of the villagers approached me and told me in Tok Pisin “MAF em i lifeline blo mipla, mipla no gat narapela rot blo travel, wanpla rot tasol mipla save travel em tru long MAF. Ol narapla balus tu save kam na go tasol ol save tok charter na long charterim balus mipla no gat displa kain moni ol bilong chaterim balus.” (MAF is our lifeline, we don’t have another means of travel, there’s only the one and only option to travel for us with is MAF. There are other aircraft landing here, but they only do it in a charter-rate, but we don’t have that much money to afford these charter rates.) I stood there nodding in agreement under my mask. He proceeded on and told me “Ol lain sanap long sait stap em ol lukim balus kam na ol hamamas na ron i kam” (When the people who are now standing at the side of the airstrip did see the airplane on approach they rejoiced and started running towards it.) and I could confirm that because of their smiling faces. At that moment, I truly confess that the small, white, red, and blue striped bird is the only hope for my unreached people. 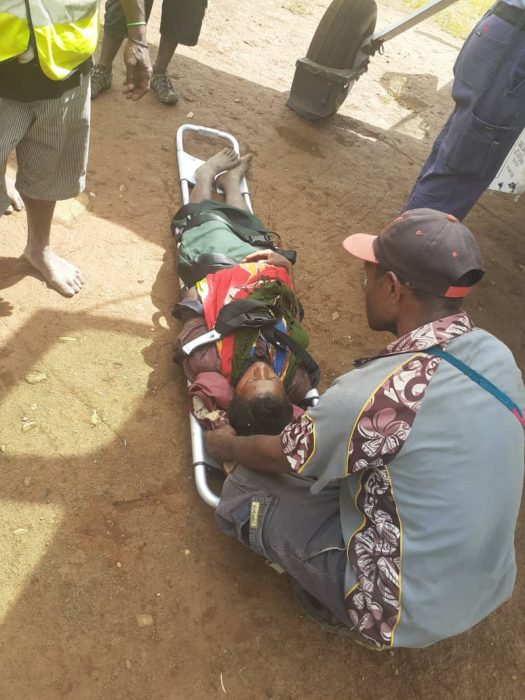 With the help of the local people we managed to get the woman onto the stretcher and into the plane with one guardian. Mathias completed his paperwork and we were back into the plane again ready to depart for Kompiam. Looking back from the co-pilot’s seat I saw the woman lying there all strapped in; she was weak and from that view she looked almost lifeless to me. My heart ached badly, I just can’t imagine the pain she endured and the thoughts going on in her mind. Seeing someone the same age as my younger sister or 3 years younger than me lying unconscious is a whole new pain. With Pyarulama being a remote community, I sense that she thought she had no hope and might die in the next three or four hours, based on the fact that she had lost a lot of blood. If I was her, I would think the same as it is very difficult for people to carry a patient on a stretcher and walk miles through the rugged terrain and cross fast-flowing rivers.

To erase those thoughts, I forced a fake smile to the guardian of the patient as we taxied. For a woman or girl to lose a hand in such a remote place would mean her household going without food on their table; if she had children then they would not have money for school fees and other basic needs. The only form of employment at such a place is subsistence farming. I can only imagine that she must have felt rays of hope when she heard the roaring engine of the aircraft.

We were airborne for Kompiam and Mathias told me the flight time would be 20min. We were two minutes away from our destination and there were heavy showers of rain falling. Visibility was very poor; I could not see the ridgelines or the nearest mountain. To be honest, I was panicking but I made a mental note not to make it obvious. The mountains were some hundred feet below and I was trying to get a clear view of what was ahead, but rain blocked the way. It was truly a time of FAITH over FEAR for me. Mathias, being Mathias the experienced pilot, flew the plane smoothly through the heavy showers and we landed safely at Kompiam. 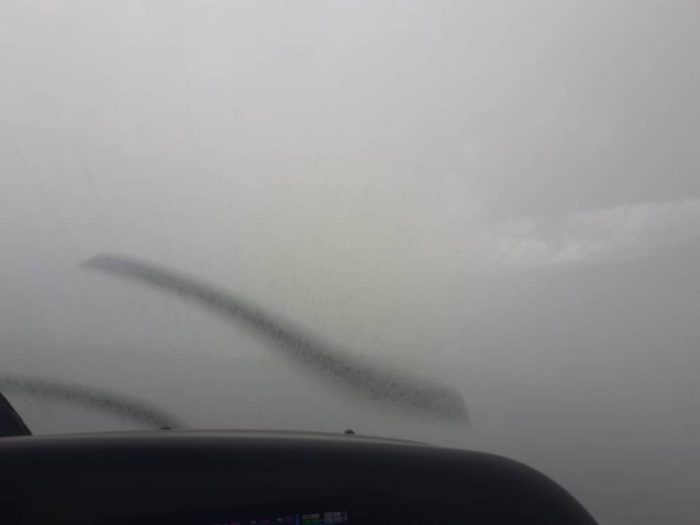 We made a short turnaround at Kompiam because the rain was about to close-in in the next few minutes. In the aircraft I lifted the stretcher with the woman and passed it on to the agent and Mathias who were already standing in the rain. They took her and placed her in the ambulance car which was parked nearby.

Ten minutes passed and we were back again in the air for Mt Hagen. Once we had landed, I thanked Mathias for doing the medevac flight. It was truly lifesaving and a relief for the Pyarulama community. The 1-hour flight was worth saving a life.

I like to take the opportunity to thank all the MAF families nationwide for their tireless commitment and efforts in serving unfortunate isolated Papua New Guineans. Special thanks to the MAF pilots and the MAF expat families who have left the comfort of their homes to serve my people.