Despite coronavirus mayhem, mountains and monsoons, Lailenpi Airstrip in Chin State, Myanmar, is nearly finished. Seven years in the making, this extraordinary feat of aviation civil engineering is due for completion in February 2021.

Situated near the mountainous Indian border with a three – day journey to the nearest city of Bagan, building Lailenpi Airstrip at 1,370m above sea level, was never going to be easy. Throw in seven months of torrential rain and a pandemic, which restricts the movement of goods, people and services, and MAF’s got a whole new set of challenges to contend with. 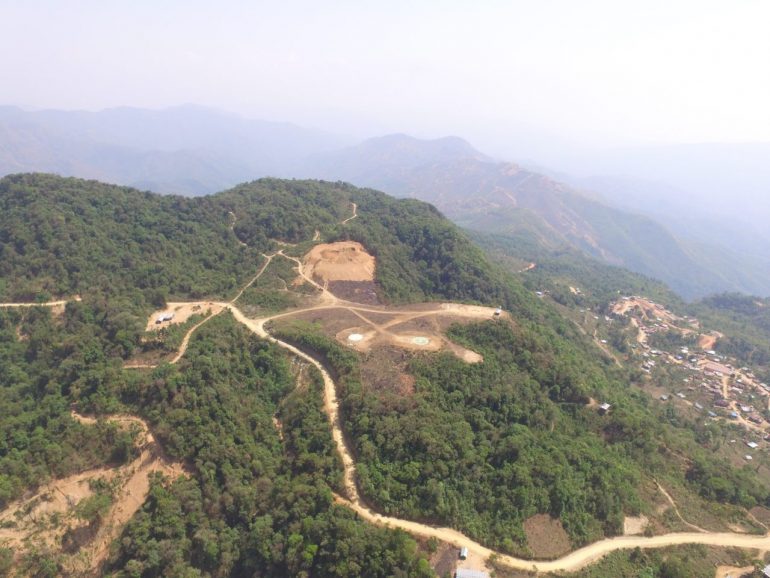 Sourcing dynamite during Covid-19 is difficult

Given there is hardly any flat land to build a runway, a mountaintop and several valleys have been cleared and filled in to enable construction of the airstrip. The project involves moving more than 300,000 cubic meters of earth – that’s approximately 30,000 truckloads.

Excavation is 92% complete, but the outstanding 8% is extremely hard bedrock (sedimentary stone) in the path of the runway, which can only be removed by explosives or a special breaker attached to the excavator. Sourcing the remaining dynamite during a national lockdown has proved extremely difficult.

Stone production for the runway’s paving is 92% complete and has been mined locally. When the drier weather returns and it’s safe for heavy trucks to drive on the so called ‘roads’, the rest of the stone will be delivered.

The paving works are in a safe state. Gravel laying and paving is 43% complete. This will resume in November or December subject to the removal of the bedrock that is blocking the runway. Until then, barriers have been put up to prevent traffic from driving on any of the paved surfaces. 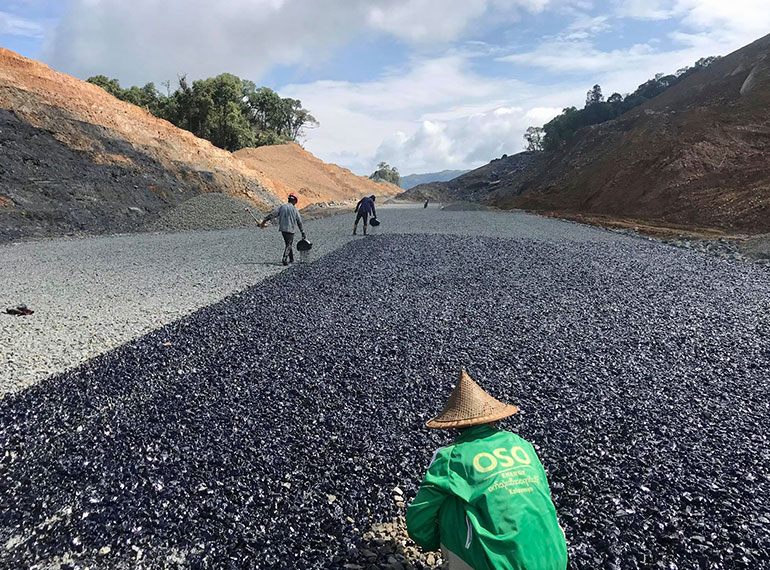 The Lailenpi site was hit by 24 inches of rain

July saw 24 inches of rain during the monsoon season, but a good drainage system on site (channels alongside the runway) quickly drained away the deluge. The retaining walls are performing well, with no signs of cracking.

For those unfazed by the treacherous driving conditions, motorbikes are a popular mode of transport, but have reduced capacity and are unsuitable for carrying large items or medevacking patients.

It’s also common for motorbikes to drive across poorly constructed cable bridges in a bid to cross streams, but they have been known to collapse. Without the use of these bridges to get them to the other side, journeys are prolonged by several days. 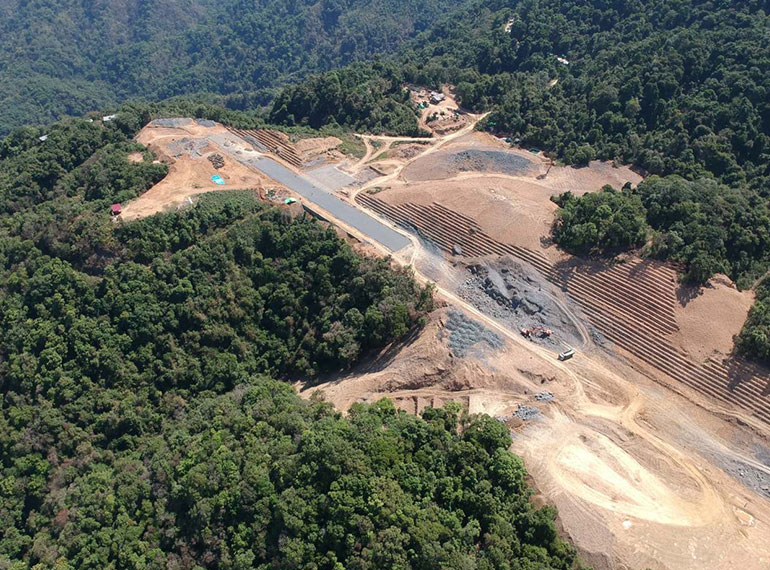 Risking a slippery road can lead to death

Those who dare to travel by car during rainy season risk getting stuck and frequently call upon the services of excavators to pull them out of the mud. On top of the inconvenience, expense and wasted time, travellers also need to factor in unscheduled overnight stays while their cars are rescued.

These are the lucky ones. For others, their vehicles accidently career off the narrow, windy roads down steep embankments, usually resulting in death.

Myanmar’s Vice President, Henry Van Thio, planned to visit the Lailenpi site in August, but his vehicle only got as far as Rezua because the road between Rezua and Lailenpi was impassable. 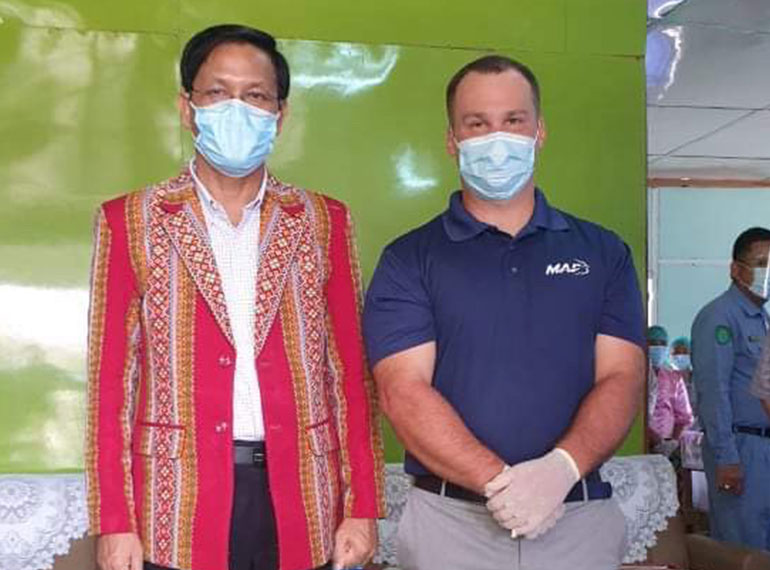 Being cut off like this puts lives and livelihoods of ordinary people at risk, but the all-year-round Lailenpi Airstrip, will create greater connectivity with the rest of Myanmar, whatever the weather.

According to MAF International CEO, Dave Fyock, the local community are fully supportive of the project and are excited about the future:

‘Lailenpi Town desperately wants us to be here. The people are committed to partnering with MAF and are participating in the construction of this airstrip. They are praying for its successful completion and for the benefits that it will bring to their community. The benefits will in fact reach the rest of the population of Chin State and beyond.’ – MAF International CEO, Dave Fyock.

The land in the immediate vicinity of the airstrip will also play an important role in the community’s future.

Lailenpi’s town and civil society leaders have joined forces to form the Airstrip Environmental Protection Committee (AEPC). Together, they will protect Lailenpi Airstrip’s environment and generate income to a) support local livelihoods and b) help respond to local natural disasters, which are common during monsoon season.

45 hectares around the airstrip has been sectioned off to grow coffee, tea, macadamia nuts, a range of fruits and flowers plus various grasses for erosion control and soil conservation.

The AEPC is working with community volunteers to make a success of this environmental project. To date, 95% of the seedlings have taken root and are growing. This is the first venture of its kind for the people of Lailenpi.

Once construction is complete, the 740m runway will serve small, light aircraft carrying up to ten passengers.

The 4,000 people of Lailenpi will no longer have a two-day arduous journey to the nearest airport or take three days to reach the nearest hospital. By air, they will have access to medical treatment in as little as 46 minutes.

The properly constructed roads from the airstrip will be accessible to 23% of south Chin State’s population (around 40,000 people).

Lailenpi’s new airstrip and associated projects will transform – and save – the lives of these forgotten people in Chin State, who are the most impoverished in Myanmar. (Source: World Bank) 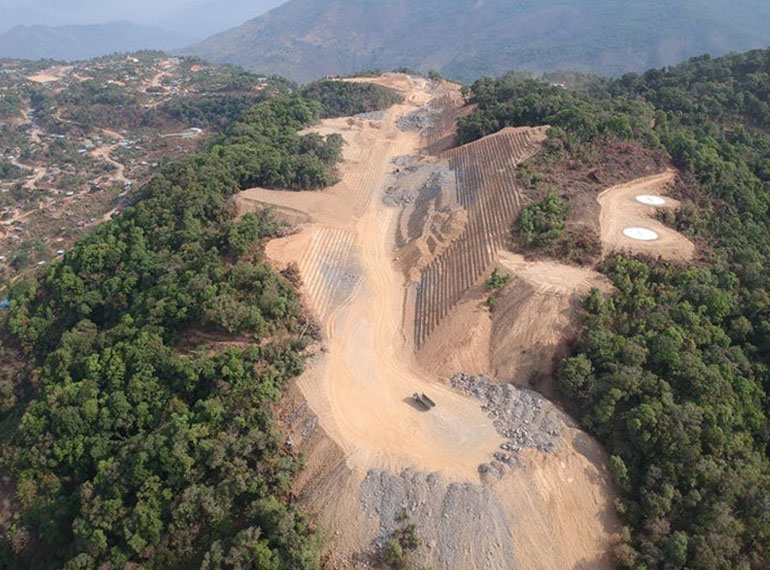