Concerned father Judianto brings his sick three-week-old daughter Jiona to the MAF plane on Atauro island for a flight to save her life. 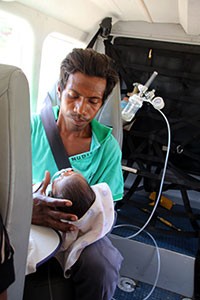 Baby Jiona was having difficulty breathing with a bronchial infection and needed help not available on the Timorese island.

Atauro island is picturesque but isolated. A ferry goes once a week to link the island to the mainland of Timor-Leste and there are also water taxis and fishing boats if the sea is calm enough. All forms of sea transportation take time though, and time was what Jiona did not have.

When her parents took her to the local island clinic, midwife Dulce Freitas knew she needed hospitalisation on the mainland urgently.

Fortunately, MAF was able to help.

Pilot Jonathan Lowe finished the flight he was on and immediately took off from Dili again, heading across the open stretch of water to Atuaro Island.

Jiona’s parents and midwife were waiting anxiously when he landed. None of the four had flown in a plane before and while that would normally be a worry, today they had other things on their minds. With a quick prayer for the baby’s safety, Jonathan was airborne again.

The flight took a mere 13 minutes and when Jonathan landed, an ambulance was waiting at the MAF hangar to transfer the group to Dili hospital. A quick flight certainly, but one where MAF was truly flying for life.