He felt something cold and slippery being wiped on him – a traditional celebratory slathering of mud – and all the eyes watching him were filled with laughter. The people surrounding this new airstrip could not have been happier.

This story – from marking out the airstrip to its first landing on a special day in February – has taken 15 years of back-breaking toil for the Lutz family and every member of the Kaiam community, tucked away in the Sepik region of PNG.

The late Dr Steve Lutz, a Lutheran missionary, marked the centre line with his family back in 2000. He sadly never got to see the finished result so for his wife Julie and son Anton this was an emotional event. 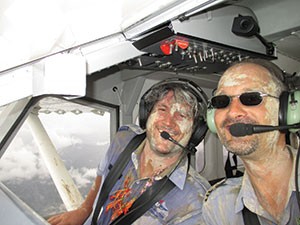 As MAF pilot Mathias Glass rolled the aircraft to a stop, copilot Sebastian Kurz opened the door and about 30 enthusiastic and excited people from the community pulled him away from the plane and lifted him onto their shoulders.

Sebastian said: “I was very thankful I had the privilege to be part of such an event. Mathias has been waiting eight years to open a new strip whereas I have not been five months in the country and have already experienced this wonderful event. I knew that it was special for the people in Kaiam to see a fixed wing aeroplane landing for the first time, but I hadn’t any idea how extraordinarily special it was for them. I have been there several times now and only slowly do I get a glimpse of what it means for those people to have access to the outside world through this airstrip.” 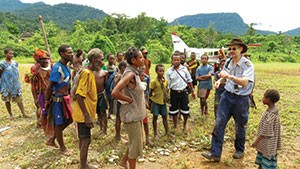 “They apparently had to travel down the Karawari River if they wanted to go to the next airstrip at Munduku,” Sebastian continued.

This journey took them two days and was exhausting.

“It was especially critical in medical emergencies. If they wanted to evacuate somebody they had to charter a chopper, which cost them a fortune.”

Mathias added: “After shutting down the engine I realised what this landing meant to the local people. They were happily jumping and shouting. There was some kind of singing as well, so I had the privilege to witness their joy as the first MAF pilot landing at Kaiam – including being covered in mud all over my body and uniform.”

Areas in the rural highlands of PNG are currently facing a measles outbreak with many children and adults dying because of a lack of immunisation. The measles epidemic has been reported as having already reached Malaumanda, which is only a 15 minute flight away. Being a small community, a measles outbreak would have devastating consequences.

The flights into Kaiam continued, and Sebastian reported: “As soon as the vaccine fridge is up and running I will fly in the measles vaccines!”

Give thanks for the opening of the airstrip in Kaiam and please continue to pray that lives will be transformed in this community.