After being separated from his family for four years due to violence in South Sudan, Chuol was finally returning home to see his family and his three-year-old daughter he had never met.

Everyone has a story to tell, but it’s easy to forget, even for someone whose job it is to find and tell those stories. Often it becomes a blur of humanity, just another face in the crowd, another passenger on a flight. You never know what life has handed the stranger next to you. 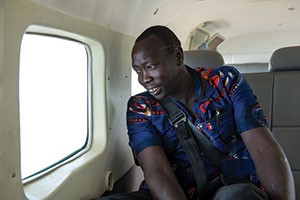 Chuol Kang Wuol arrived an hour late for check-in at the Juba airport. The scheduled MAF flight, heading to Renk in the northernmost corner of South Sudan, needed to leave on time for the long journey.

When Chuol finally walked into the MAF airport office, he had left his luggage in the car. After retrieving the bag for weighing and tagging, we walked toward the terminal as a friend showed up with yet another bag which now needed to be weighed and tagged back at the office.

We were late and irritated. We knew only that this tall Nuer man would be dropped off in Udier, a village on the way to Renk. It was a Medair flight, and for some reason, Medair felt that this man was priority. We soon found out why.

4 years away from home

Chuol, whose contract work with Medair had ended, was returning to his home to see his wife and four children for the first time in four years. Chuol had never met his youngest child, now three, who was born after he left home. If he was excited and scatterbrained, it was absolutely understandable. 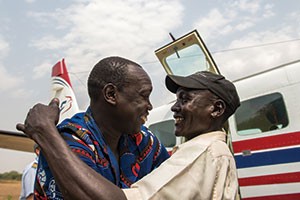 Those years away from home included several times of extreme danger that forced Chuol to hide or run for his life. In the most recent incident in August 2014, while working in logistics for Medair in a large northern refugee camp, fighting broke out with armed gangs targeting Nuer people. Caught at the market when the violence erupted, Chuol hid for two days with no water while the militia searched for Nuer to kill.

Six Nuer staff working for various international humanitarian organisations were executed, including some dragged from their well-marked vehicles and shot.

Chuol witnessed two men near him die but he was able to escape and later evacuated to Juba, although not without residual mental trauma. One Medair staff recalls waking night after night to the panicked cries of Chuol’s nightmares months later. 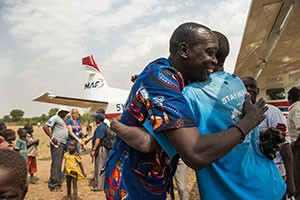 “I know that life is changing, that life in the world is not permanent,” Chuol said, reflecting on how he had coped with such harrowing experiences. “When you see too much, you become a bit mad. But you can just be reminded to take it very easy because I know the time has come to get my family, and to get my people.”

Through the violent South Sudan crisis, with no communication, for a time Chuol and his wife didn’t know if the other was dead or alive. Finally he was returning to his home, his friends, his family.

Chuol stared intently out the window as the MAF plane landed at Udier, a small dirt strip in a remote and inaccessible region that had only been rehabilitated seven months earlier. He wasn’t sure if anyone knew he was coming, but as the tall lanky man climbed down the aircraft steps, shouts rang out as people recognised and gathered around Chuol, holding him, touching him, with tangible love and joy.

I imagined the healing this kind of love could bring. I was reminded as well of the simple truth, that in this land of turmoil, statistics, and massive impersonal numbers of displaced and dead, everyone has a story – and every life matters.