Attacked by a Crocodile: MAF in Arnhem Land

A slow day was coming to an end in Ramingining. I had been working from home and was just about to walk out to the car to drive to the airport. I had left the plane ready to fly throughout the day, although I had no flights booked. Now it was time to lock it up again for the night.

My work number rang and I saw that it came from the payphone of a small homeland on the far side of the Arafura swamp. We regularly fly in clinic teams and some of the locals come in to community to do shopping. It was Michelle. She lives in Mirrngatja to look after her father. Michelle sounded anxious and immediately asked if it was too late to fly. My first thought was to tell her that I could easily pick her up in the morning to do shopping, but she followed up with “…because we have an emergency, Kelvin has been bitten by a crocodile!” Everything changed. I told her to stay on the line while I told my wife, Lia, to contact the local clinic. Michelle didn’t have the number for the Ramingining clinic, so she had contacted the clinic in Lake Evella, from where the homeland clinic visits originated. Soon after, the Lake Evella clinic manager called to confirm the flight and requested I take some clinic staff with me to provide first aid. 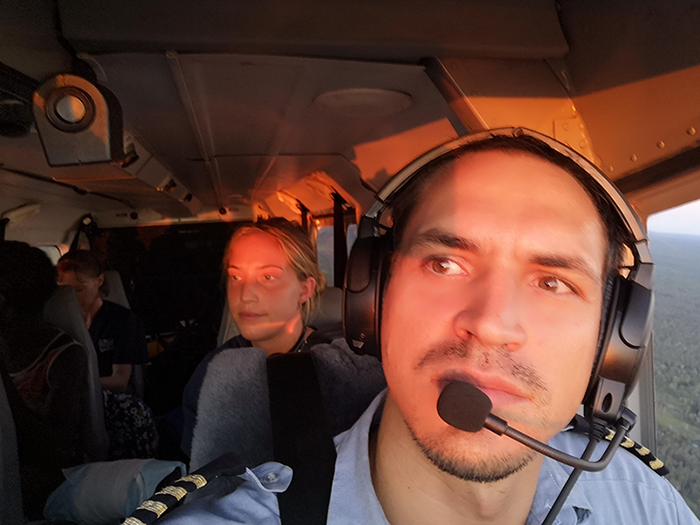 I checked my weather report again and confirmed I had just about an hour to do the round trip. I assured Michelle that I would have just enough time to do a pick up and would bring two nurses. She would have to find a way to bring Kelvin to the airstrip, only about 500m, as we would not have time to walk in and walk back. They had already organised a small ATV from the rangers that are stationed there. 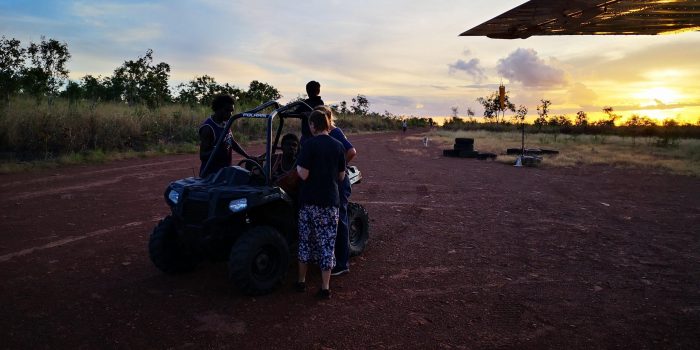 Just after 5pm I reached the airport and prepared the aircraft to fly. I realised I would need just a couple of litres of extra fuel, so I got out the fuel drum. The nurses had not arrived when I finished fuelling, and I decided to run up the engine to save time later. When the two nurses arrived we were ready to fly in about 10 minutes.
Lift off at 10 minutes to 6pm. The wheels in my head were turning over the numbers…the flight plan said 15 minutes there, 14 minutes back…that would leave us with 10 minutes to load and get away. There was a thin line of showers in our way, but it didn’t look like it would get any worse. I took a deep breath…one step at a time.
Mirrngatja is a stunning outstation surrounded by a vibrant green swamp. The low sun shone a reddish light on the buffalo grazing below, and the usually white cockatoos looked colourful.

There was a group of people and a quad bike near the parking area where we stopped the plane. We were all relieved to see the victim was much better condition than we expected. He was sitting on the bike and was able to hobble into the aircraft between one of the nurses and myself as support. He was in pain and still bleeding, but the nurses agreed to get airborne and then they would treat him during the short flight. 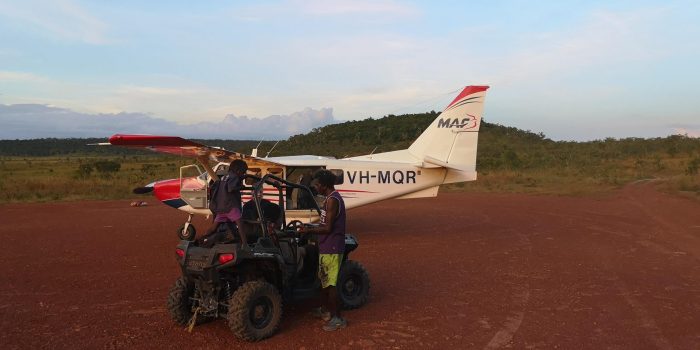 At 6:15pm we were back in the air. My original flight planning showed that I would be late by a minute. However, I noticed that the wind was slightly stronger than expected and would help us on the way back. Sure enough, the GPS showed an arrival time 1-2 minutes before the cut-off! Coming overhead Ramingining we were flying through light rain and the sun had already disappeared behind the horizon. It was getting dark quick under the rain clouds, but the sun was sending us its last light in a beautiful sunset to the west. 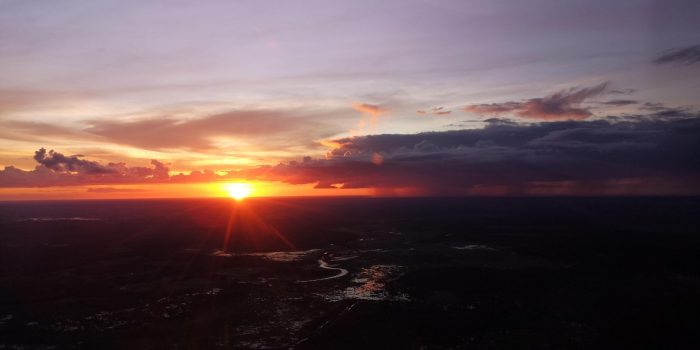 The ambulance, the police and a group of locals were there to help us unload. It was dark now. I parked the plane, and locked up. I didn’t see the blood until the next morning. Kelvin was treated in the local clinic and then flown out to the Hospital.