“I had asked our MAF Operations Director to let me know if there was any medical flights leaving from Mt Hagen in the next few weeks and if so, if he could arrange with a pilot for me to go for a look and see MAF in raw action.

A week later I got a call saying a flight was happening, could I be at the hanger in half an hour? Of course!

I got to the hanger and went to the Ops room for a run down. A small community from Pyarulama had gotten in touch via HF radio asking for a medevac. The call hadn’t seemed urgent so the first of many decisions for MAF when asked for medevac assistance is to assess the call for help and decide whether it’s a ‘right now’s kind of thing’ or not such an emergency to use our funding and sponsorship in the wisest way possible.

OPs and the pilot decided they could fly out and, in this case, would assess further once we landed there. Pilot Mathias instructed me to bring the medevac paperwork from OPs to the plane, and, after getting me buckled into the co-pilot seat, we were off!

It’s only a short 20-minutes flight by MAF plane to Pyarulama. We passed over the many mountains and started searching in the valley for the tiny Pyarulama airstrip. The pilot directed my attention to a small clearing to our left and informed me that was the airstrip. It was only a few hundred meters long and we would land uphill – this meant we flew towards a hill face and landed rolling up the hill. I told the pilot I wasn’t scared but maybe I was! 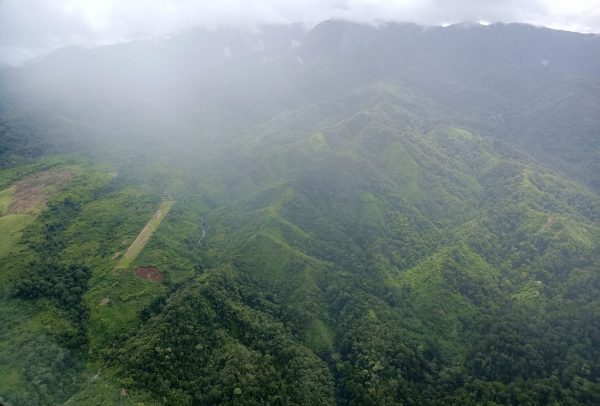 We landed on the airstrip and bumped to a halt at the top, in front of the community who had, of course, come to watch for the MAF plane. We got out and the pilot shook some hands and greeted our MAF agent who had made the call.

I had never been to this part of PNG before. Many of the young boys wore traditional grass skirts and some carried home made bow and arrows. Young men in the tribe had their faces painted and nearly everyone wore small bands around their feet. 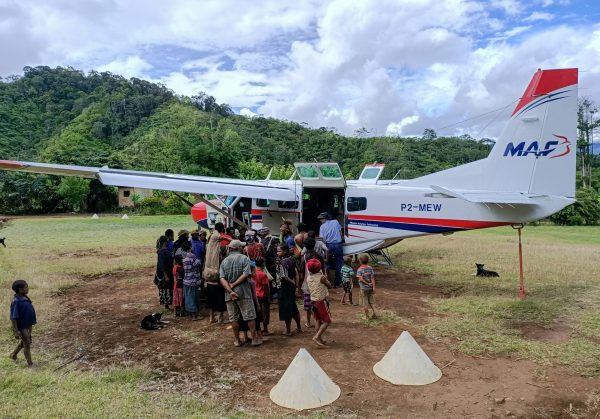 A man standing next to me turned his head to the side and I could see the hole through his nose where decoration must have once been.

The children were all scared of me. I was white and a female. Not many of those were found in these tugged away highlands places! I struck up a simple conversation in Tok Pisin and found someone who could translate for me into the tribal language. They laughed at my funny accent!

Off to the right we could see a group hurrying towards the plane. There must have been about 8 people carrying a home-made stretcher on which lay our patient. A crowd of concerned faces followed them as he was brought towards the plane. His Engan, sing-song cry heard above the crowd anytime he was bumped or moved too quickly. I later found out that as he was cutting down a tree the tree landed on his leg and crushing his bones.

It was a good thing MAF had come!

After some discussion with the pilot, the community decided to use their home-made stretcher instead of the one from the MAF plane so, on the count of 3, the patient braced himself and was lifted up on the stretcher into the aircraft to be secured to the airplane floor. A woman, most likely his wife, and another man jumped in the plane to accompany him to the hospital. 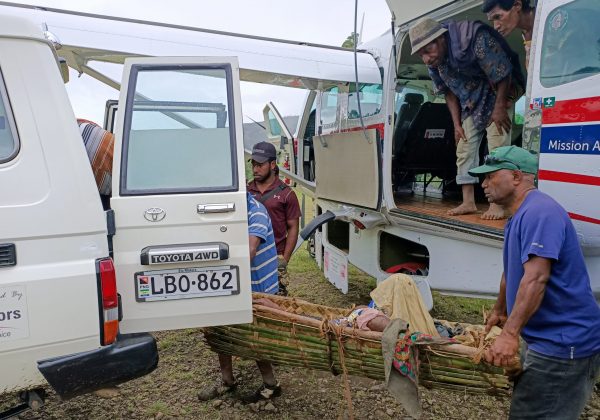 We buckled ourselves in again and watched and waited as our MAF agent ran across the runway to scare off the stray dogs. Children sat off to the side of the runway. Watching. Our pilot went through his checks and then focused as it was a short runway and, like many of PNG’s bush strips, we had only one chance to get it right. We exchanged a wave through the window with our onlookers and I glanced behind as we powered up. The woman was sitting beside the injured man comforting him and we all braced ourselves for the bumps on his behalf.

We landed between the mountains at Kompiam where the ambulance met us. The Kompiam MAF agent helped to get him and his stretcher into the ambulance and the driver carefully drove up the hill towards the hospital. 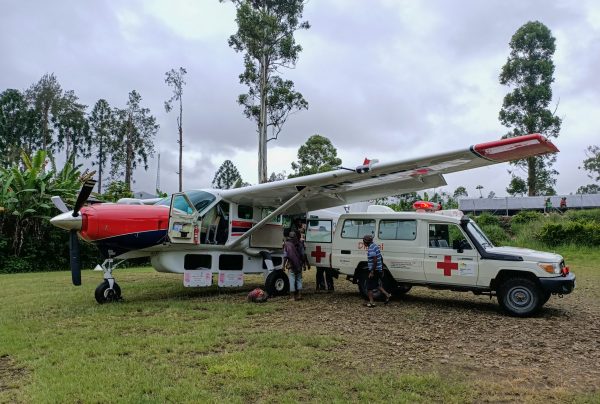 We again waited for dogs to vacate the runway and took off back home to Hagen after a successful afternoons work, thanking God for good weather!