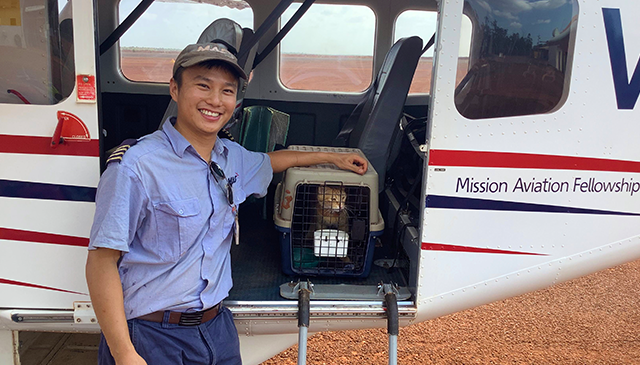 Anton is an ABC (Australian-born Chinese) hailing from the south-west suburbs of Sydney.  As a child Anton was dragged (sometimes reluctantly) to church, but by the beginning of high school he had made a personal commitment to follow Jesus and was baptised in Year 7.

During high school, Anton first wanted to become a rock star, then a doctor, and then finally a fighter pilot – a dream which he pursued.  In Year 12, he went through the RAAF pilot selection process but was rejected.

After leaving school, Anton stubbornly held onto that dream for a while.  However, he soon began to realise that what he was pursuing was for his own glory.  Eventually, God gave Anton a change of direction – to use his passion for aviation to serve God and people in isolated places.

Anton eventually obtained his pilot qualifications from the University of New South Wales, and undertook theological studies at Sydney Missionary and Bible  College.  He is now serving with MAF as a missionary pilot in Arnhem Land, and is based in an Aboriginal community called Ramingining.

“Look at the birds of the air; they do not sow or reap or store away in barns, and yet your heavenly Father feeds them. Are you not much more valuable than they?“

Stay up to date on Anton Zhang